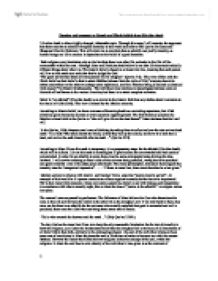 Examine and comment on Islamic and Hindu beliefs about life after death Life after death is often a highly charged, debateable topic. Through this essay I will examine the argument that there must be an afterlife to explain morality in this world and refer to The Qur'an for Islam and Bhagavad Gita for Hinduism. This will allow me to conclude that an afterlife can justify morality, as human beings our life's conduct is dependant on the belief of a good hereafter. Both religions very foundation rely on the fact that there is an after life, as deeds in this life will be accountable within the next. Although Islam and Hinduism both believe in an after life they teach radically different things about what it is. The Islamic belief is based on a linear time line, meaning that each person will live on this earth once and after that be judged by God. "The good and the bad deeds of every person will be weighed." (Qur'an 7:8). This view differs with the Hindu belief as their belief is that to attain Mokhsa (release from the cycle of life) "everyone has to be reborn somewhere or the other to undergo some experience, until the Absolute Being is realised as identical with oneself." by Swami Krishnananda. The individual must continue to transmigrate between souls to diminish all bad karma in the various lives they had been in to attain complete salvation. Belief in "al- akhirah" (life after death) is so crucial to the Islamic faith that any doubts about it amounts to the denial of Allah (God). This view is shared by the Muslim minority. According to Islamic belief, we have no means of knowing death as a revisiting experience, but Allah (God) has given humanity answers to every question regarding death. The first rhetorical question the Muslim is faced with in the Qur'an is "who will give life to the dead bones?" ...read more.

"Keep on doing Hajj and 'Umrah, for they eliminate poverty and sin just as the bellows eliminate impurities from iron and gold and silver." (Sahih Bukhari). In Islam, the foundation for a good afterlife is to have faith in the almighty lord and to try to lead a sin free life. Such is the driving force behind the concept in Hinduism be lovingly devoted to whichever Hindu god you are devoted to and similarly be dedicated to various religious ceremonies and rites. There are different aspects of Hinduism that determine how they lead their lives and what actions they do in order to affect their afterlife. There is also the factor of the burial procedure that could affect your outcome in the afterlife. The reasoning behind Hindu cremation is that they believe that the human personality is made up of five elements; four of which belong to the body which comes from this world, fire, earth, air, water. By cremating the body, the elements are returned to their respective area, while the soul continues in the afterlife. After death Muslims are buried, because even after death the soul can still feel pain so disposing of the body in any other means is a sin. When a Hindu devotee dies their soul leaves the body and goes to another world and returns again after spending some time there. Where a person is reborn is determined by their "karma", the effects of a person's actions that determine their destiny in the next incarnation. Hindus try to do virtuous acts of conduct so that they will increase their good karma and be reborn higher up in the caste system. This is done in numerous ways. Their initial aim is to worship Brahman (supreme Lord) by thinking about him and reading his Holy books. The Vedas, Smritis, Ramayan and Bhagavad Gita; Their life should involve praying and making offerings to the various Gods that take form from Brahman originally. ...read more.

(The day of judgement by the Sunni foundation) 3) "And verily, Hell is the promised abode for them all. It has seven gates: to each of those gates is a specific class of sinners assigned." [al Hijr, 15: 43-44] Murderers: "And whoever kills a believer intentionally - his recompense is Hell to abide therein forever, and the wrath and the curse of Allah is upon him, and He has prepared for him a great punishment." [an-Nisa, 4: 93] "Verily, of the inmates of the Fire, the one with the easiest punishment will be one who will have a pair of sandals and straps of fire. His brain will boil from them as a kettle boils. He does not see that anyone is suffering a punishment more severe than him, while he is the one with the easiest punishment." [Sahih al-Bukhari and Muslim] http://www.shariahprogram.ca/articles/hell-devil-description.shtml 4) Then believers and disbelievers will go to the bridge lying over the fire from hell "the bridge will be of one single hair and be sharp as a sword." The journey will be of no difficulty to those who lived their life according to Islam. 5) Indralok is the standard heaven to which those who please the Gods through their activities go. The standard hell is Yamalok. 6One example is the 11-month-old Muslim boy from India. He has now been named Balaji, another name for monkey-faced Lord Hanuman. "He is reported to have a 4in 'tail' caused by genetic mutations during the development of the foetus. Iqbal Qureshi, the child's maternal grandfather, is taking Balaji from temple to temple where people offer money to see the boy. Mr Qureshi says the baby has nine spots on his body like Lord Hanuman and showed them to journalists, reports Indian newspaper The Tribune." What this quote shows is that there are differences of opinion within a religion as even genetic mutations such as this one have altered the decision in believing in the Day of Judgement for a Muslim man. (http://www.freerepublic.com/focus/fr/607381/posts) ?? ?? ?? ?? 1 ...read more.