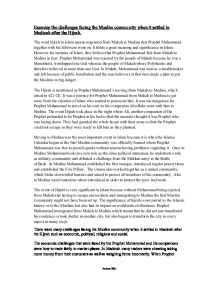 The Umma also worked together as a united community, which broke down tribal barriers and aimed to protect all members of the community. Also in Medina social sanctions where introduced in order to protect the poor and weak. The event of Hijrah is very significant in Islam because without Mohammad being rejected from Makah and having to escape persecution and immigrating to Medina the first Muslim Community might not have been set up. The significance of hijrah is not partial to the Islamic history or to the Muslims but also had its impact on worldwide civilizations. Prophet Muhammad immigrated from Makah to Medina which meant that he did not just transferred his residence or took shelter in another city, but also began to transform the city in every aspect in many ways. There were many challenges facing the Muslim community when it settled in Madinah after the Hijrah such as economic, political, religious and social. ...read more.

The social challenges was establishing brotherhood between people, just so that they grow love for each other as this will cause less fights and arguments. Bringing peace between people and tribes were Prophets responsibility. Prophet Muhammad also established a good relationship with the people where they all worked as a team to give out invitation of Islam. He established brotherly relations between the Muslims who migrated from Makah and the residents of Medina who helped the Prophet and his companions. The relationship between the Muslims was very important to the Prophet brotherhood was on the basis of faith. The challenges faced by the Prophet lead to success of Islam as there were many people who started to respect Prophet and were polite to him. Majority of the people who lived in Madinah became Muslims and the love between the brotherhoods increased. Leading good life socially made Prophet content and happy as he knew that the word of Islam has been spread. ?? ?? ?? ?? Amina Bibi ...read more.