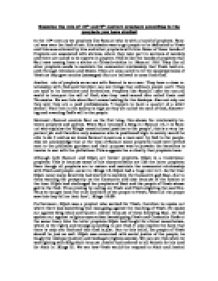 Examine the role of 10th and 9th century prophecy according to the prophets you have studied In the 10th century we prophets like Samuel who is with a band of prophets. Samuel was even the lead of one. His mission was to get people to be dedicated to Yhwh and this was achieved by him and other prophets with him. Some of these bands of Prophets are associated with shrines, where they take part in services of worship and there are called to be experts in prayers. This is like the bands of prophets that Saul saw coming from a shrine at Gibeath-elohim in 1Samuel 10:5. They like all other prophets needs to maintain the covenantal relationship that Yhwh had created through Abraham and Moses. They are also called to be the spokespersons of Yhwh as they gave oracles (messages) ...read more.

job and therefore only someone who is positioned high in society would be able to do it and as we know Samuel is seen as a man sent by God to the people. Also we acknowledge that at the time of Samuel some prophetic band were settled next to the philistine garrison and their purpose was to provoke the Israelites to involve in war with the philistines. This suggests the authority that prophets have. Although both Samuel and Elijah are former prophets, Elijah is a transitional prophets. This is because some of his characteristics are like the latter prophets. Even though all prophets are to restore and maintain the covenantal relationship with Yhwh and people, as we in 1Kings 18, Elijah had a huge role in it. As the time Elijah came many Israelites had started to worship the Canaanite god Baal, due to them wanting the prosperity as the Cannanite and also because of the famine at the time. ...read more.

It also implies the facts that there is only one God and that God is just. Due to this belief, the people of Yhwh should be just as well. Elijah was concerned with social justice of the people, he fought for mishpat (justice) and tsedaqah (righteousness). We can see this when he was fighting with King Ahab because Jezebel had ordered to kill Naboth for his land for Ahab in 1Kings 21. We see how Yhwh would the respond to Ahab and Jezebel due to their in justice to the people. 1Kings 21:24 "those of Ahab's family who die in the city, the dogs will eat''. Overall I believe the role of prophets in the 10th and 9th century is quite important. They are needed in the society at the time to keep the people in order and to maintain the covenantal relationship with Yhwh. They are also important in society for advice and as a man of God. ?? ?? ?? ?? ...read more.