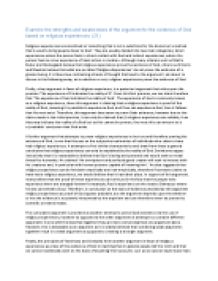 Examine the strengths and weaknesses of the argument for the existence of God based on religious experiences.

but the argument depends upon the whether or not the evidence is accurately interpreted by the experient and can therefore never be proven by scientific or tested means. The cumulative argument is provided as another attempt to prove Gods existence via the use of religious experiences, however as opposed to the other arguments it attempts to combine different arguments in one with the idea that together they are more convincing than one argument alone. However, this is debatable as an argument as it is widely believed that combining weak arguments together result in a weak argument as opposed to creating a stronger argument. Finally, the principles of Testimony and Credulity form another argument in favor of religious experiences as prove of the existence of God in claiming that in general people tell the truth and that we cannot realistically work on the basis of doubting their accounts. Just as we cannot doubt basic facts about the world because we have not experienced it ourselves. The principle of testimony claims that unless we have evidence to the contrary we should believe what is claimed, it is argued ?In the absence of special considerations, their experiences of others are as they report them?. ...read more.