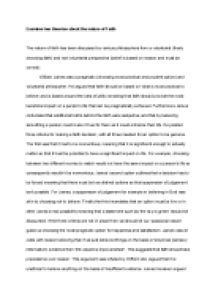 Examine two theories on the nature of faith

Transfer-Encoding: chunked ﻿Examine two theories about the nature of Faith The nature of faith has been discussed by various philosophers from a voluntarist (freely choosing faith) and non-voluntarist perspective (belief is based on reason and must be correct). William James was a pragmatic (choosing most practical and prudent option) and voluntarist philosopher. He argued that faith should be based on what is most practical to believe and is based around the idea of utility meaning that faith should provide the most beneficial impact on a person?s life that can be pragmatically achieved. Furthermore James contended that additional truths behind the faith were subjective and that by believing something a person could make it true for them as it could enhance their life. ...read more.

If the three criteria are not in place then we should let our ?passional nature? guide us choosing the most pragmatic option for happiness and satisfaction. James was at odds with reason believing that if we just believed things on the basis of empirical (sensory information) evidence then ?life would be impoverished?. This suggests that faith should take precedence over reason. This argument was refuted by Clifford who argued that it is unethical to believe anything on the basis of insufficient evidence. James however argued that he risked loss of truth by not chancing error, and that decisions based entirely on faith without reason to support them could be justified. Kierkegaard?s theory on the nature of faith is also a voluntarist theory and is similar in the way it prioritised faith over reason. ...read more.

He believed that faith remains committed in spite of evidence ergo it is superior to reason in this regard also. Finally, in the passion argument Kierkegaard suggests that faith in the existence of God requires a reason improbability of his existence. Consequently the more faith required to believe something, the greater the reward. This area of his theory of the nature of faith is arguably his most controversial with it seen as permission to believe even the most outlandish of possibilities. Kierkegaard also described faith as floating on 70,000 fathoms of water without being afraid. This type of faith is known as ?fiducia? or ?belief in? relating to trusting in something rather than fides ?belief that? based on facts. Kierkegaard's analogy demonstrates that while reason might draw attention to potential dangers of the situation, faith allows you to feel able to float without fear in spite of reason. ...read more.