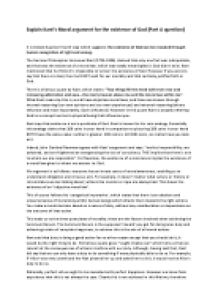 Transfer-Encoding: chunked ﻿Explain Kant?s Moral argument for the existence of God [Part A question] It is indeed Aquinas? fourth way which suggests: the existence of God can be revealed through human recognition of right and wrong. The German Philosopher Immanuel Kant (1724-1804) claimed that only one fact was indisputable, and that was the existence of a moral law, which was totally meaningless is God didn?t exist. Kant mentioned that he thinks it?s impossible to ?prove? the existence of God. However if you were to say that there is a God, then he MUST exist for our morality and that certainly justifies faith in God. There is a famous quote by Kant, which states: ?Two things fill the mind with ever new and increasing admiration and awe?the starry heaven above me and the moral law within me?. ...read more.

For Newman, the existence of a conscience implies the existence of a moral law-giver to whom we answer to: God. His argument is as follows: everyone has an innate sense of moral awareness, enabling us to understand obligation and virtuous acts. For example, it doesn?t matter what culture or history or circumstance we are talking about; actions like murder or rape are always bad. This shows the existence of an ?objective moral law?. This of course follows his ?categorical imperative?, which states that there is an absolute and universal sense of moral duty within human beings which directs them towards the right actions. You make a moral decision based on a sense of duty, without any consideration or dependence on the outcome of that action. This leads us to the three postulates of morality, these are the factors involved when achieving the Summum Bonum. ...read more.

However we know from experience that this is not always the case. Clearly this is not achieved in this lifetime, therefore we must presume that there is an afterlife, of which provides humans the opportunity to have immortality. An ?average? level of virtue is not enough and we are obliged to aim for the highest standard possible. This however is only possible after a lifetime of fulfilling moral duties and we do not possess the power within ourselves to coincide both perfect happiness and moral perfection (achieve the Summum Bonum). Therefore to conclude, it is clear within Kant?s moral argument that God must exist as a postulate of practical reason. For without the existence of God, we cannot have the afterlife and we would not be able to fufil our obligation of reaching the summum bonum. Therefore God is necessary to ensure fairness in the universe and provide us with perfect happiness. For who else is omnipotent and omni-benevolent to do such deed? ...read more.