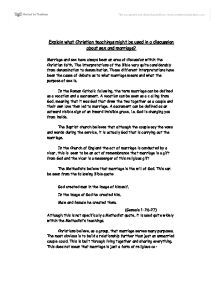 Explain what Christian teachings might be used in a discussion about sex and marriage?

Explain what Christian teachings might be used in a discussion about sex and marriage? Marriage and sex have always been an area of discussion within the Christian faith. The interpretations of the Bible vary quite considerably from denomination to denomination. These different interpretations have been the cause of debate as to what marriage means and what the purpose of sex is. In the Roman Catholic following, the term marriage can be defined as a vocation and a sacrament. A vocation can be seen as a calling from God, meaning that it was God that drew the two together as a couple and their own love then led to marriage. A sacrament can be defined as an outward visible sign of an inward invisible grace, i.e. God is changing you from inside. The Baptist church believes that although the couple say the vows and words during the service, it is actually God that is carrying out the marriage. In the Church of England the act of marriage is conducted by a vicar, this is seen to be an act of remembrance that marriage is a gift from God and the vicar is a messenger of this religious gift The Methodists believe that marriage is the will of God. This can be seen from the following Bible quote: God created man in the image of himself, In the image of God he created him, Male and female he created them. ...read more.

The vocation of marriage that I mentioned earlier can include the bringing up and teaching of children about their religion. Marriage can also change people in a religious sense. Marriage can be seen to deepen the faith of many that undertake it, for many that have not been confirmed within their church it can be their first religious experience since their christening. The service can help the couple to have a deeper understanding of their faith. In the Bible the first instruction that Adam and Eve received from God was to have sex: "God blessed them, saying "Be fruitful, multiply, fill the earth and subdue it"" (Genesis 2: 28) The Bible does not teach that sex should be performed outside of marriage, it teaches that sex before marriage is wrong. The words chastity and fidelity are used in the Bible. The word chastity literally means a form of purity, in this Christian context it means refraining from sex before marriage and thus keeping yourself pure. The word fidelity literally means faithfulness and can be seen in this context as not having sex with someone else while you are married. All of the Christian churches believe in the statement below. The churches all agree that marriage should be monogamous, meaning that only one partner should be involved within the marriage. ...read more.

We shall praise your love above wine; How right it is to love you. (From the Song of Songs: 1-4) Jesus first supported the idea of the marriage service and showed it's importance when he performed his first miracle at the wedding at Cana. He was not ready to perform his first miracle because it would draw attention to him and start his journey to his own crucifixion. However he felt that a wedding was such an important event that he performed the miracle which started hastening his own death. "When the ran out of wine, since the wine provided for the wedding was all finished, the mother of Jesus said to him, "they have no wine". Jesus said to her, "why to you turn to me, my hour has not come yet"." (John: 3-5) Jesus did not want the newly wedded couple to be embarrassed at their wedding party so he performed the miracle even though he was not ready to do so. This is a great sign of the significance of the wedding ceremony. Although all the Christian denominations do not agree on specific points on this topic, they all share a common belief. This belief is that marriage is used to show a commitment to a partner and sex can be used to enforce the bond that marriage had created. ...read more.