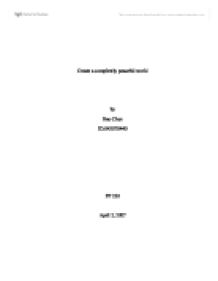 So, human beings do not naturally have incentive to use violence or war to solve conflicts. Human beings, however, must want to only threaten others with death for recognition. The threat will never be credible, because the death of the slavers will make the master be meaningless. A master can not be a master if there are no slavers at all. Therefore, non-violent resistance makes sense in dealing with conflicts in the world. For example, suppose there is a very small community with only two men inside. In terms of Hegel's Chen 4 human nature theory, both of the two men will struggle for recognition of being the master. The natural drive will cause conflicts between the two men. To solve the conflict, the stronger man will make a death threat to the weaker man. However, the stronger man actually will never kill the weaker man if the weaker man does not use violence against the stronger man, because the stronger man desires the recognition from the weaker man. So the weaker man does not need to fear the death threat. ...read more.

If the conflicts come from recognition, the non-violent resistance strategy will be very effective to prevent war or violence. However, if the conflicts come from safety, gain and glory, using non-violent resistance might just simply like suicide. In history, there were lots of evidences of genocide incidents. For example, in the World War II, Nazi tried to kill all the Jews. So it is difficult to persuade everybody to always behave non-violent resistance while having conflicts with much more powerful competitors. In sum, human nature is the natural desires of safety, gain, glory and recognition. To fulfill the natural desires, conflicts between individuals or nations will emerge. The conflicts are the very root of wars. A powerful world government and universally accepted non-violent resistance strategy can terminate wars in the world. However, there are some unsolved challenges of establishing a powerful world government and accepting non-violent resistance universally. Chen 7 Notes Awad, Mubarak E., "Nonviolent Resistance: A Strategy for the Occupied Territories" from Non-violence in theory and Practice, Robert L Holmes. Ed. Wadsworth Publishing Company, 1990. Hegel, G.W.F, "Independence and Dependence of Self-Consciousness: Relations of Master and Servant" from Phenomonology of Spirit, 2nd ed. Forrest E.Baird and Walter Kaufmann, eds, Prentice-Hall, 2000. Hobbes, Thomas, "excerpt" from Leviathan, Public Domain, 1651. ...read more.