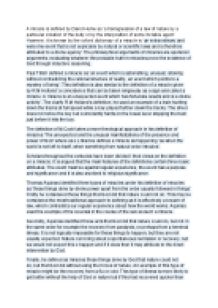 ﻿A miracle is defined by David Hume as ?a transgression of a law of nature by a particular violation of the deity or by the interposition of some invisible agent?. However, it is known by the oxford dictionary of a miracle is ?an extraordinary and welcome event that is not explicable by natural or scientific laws and is therefore attributed to a divine agency? The philosophical arguments of miracles are apoteriori arguments, evaluating whatever the probable truth in miracles prove the existence of God through inductive reasoning. Paul Tillich defined a miracle as ?an event which is astonishing, unusual, shaking without contradicting the rational structure of reality, an event which points to a mystery of being?. This definition is also similar to the definition of a miracle given by R.M Holland ?a coincidence that can be taken religiously as a sign and called a miracle. A miracle is an unexpected event which has fortunate results and is a divine activity?. The clarify R.M Holland?s definition, he used an example of a train hurtling down the tracks at full speed while a boy played further down the tracks. The driver does not notice the boy but coincidently faints on the break lever stopping the train just before it hits the boy. The definition of M.Cook takes a more theological approach in his definition of miracles ?The unexpected and the unusual manifestations of the presence and power of God? where as J.L Mackie defines a miracle as happening ?as when the world is not left to itself, when something from natural order intrudes?. ...read more.

Swinburne argued that, throughout our daily lives, we believe and trust our senses when something appears to happen out of the extraordinary. For example, if we come across a Hollywood star in Leeds, we know it is unlikely event but we would still trust our vision. Swinburne therefore argues that if we appear to experience a miracle then we should trust our sense. Unless we are drunk or mentally unstable, then we should believe that the experience we seem to be having is genuine. Swinburne argued in his principle of credulity that ?in the absence of special considerations the experiences of others are probably as they report them?. If we imagine that it was not us who experienced the unlikely event of meeting a celebrity but a friend who claims to, would we believe them? There are also some points where we would doubt this friend, if we knew them to be a compulsive liar, mentally unstable or a drug addict. Swinburne suggests that we should also be prepared to trust other people?s accounts of miracles, unless we have a valid reason to doubt them. ii) There are many problems raised by definitions of miracles that may lead to a rejection for the belief in miracles. Thomas Aquinas defines a miracle as ?those things done by divine power apart from the order usually followed in things?. Aquinas? argument is open to a wide range of criticism as it could be argued that the divine power does not intervene in the order of the universe. ...read more.

Dawkins develops his argument against miracles further by arguing that a belief in religion is dangerous as it means that people turn away from scientific facts and rely on God. This could also lead to seriously ill people as they have the belief and trust in God to make them better but only to realise that this will only make them worse due to the throwing away of vital medication. I think that Dawkins argument is a fair argument as it shows that a belief in miracle can offer false hope and unfair suggestions that they might be cured from something other than scientific advances. To conclude, I think the biggest problem raised by miracles is the belief in God and that we only know that he performs miracles on rare occasions. We also have to question the morality of God as it would seem that God would have favourites to allow 6 million people to die in the holocaust and yet allow one man to be cured of cancer. Even though the critiques can be defended by saying that we should not question God and God reveals himself to us in different ways other than miracles, I do not believe that this is a successful response. Overall, I think that the problems raised by these definitions of miracles lead to a rejection of belief in miracles and although the thought of a miracle taking place to a sick person gives hope, they would be better to rely on science instead. ...read more.