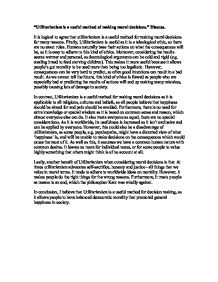 Utilitarianism is a useful method of making moral decisions. Discuss.

"Utilitarianism is a useful method of making moral decisions." Discuss. It is logical to agree that utilitarianism is a useful method for making moral decisions for many reasons. Firstly, Utilitarianism is useful as it is a teleological ethic, so there are no exact rules. Humans naturally base their actions on what the consequences will be, so it is easy to adhere to this kind of ethics. Moreover, considering the results seems warmer and personal, as deontological arguments can be cold and rigid (e.g. ...read more.

In contrast, Utilitarianism is a useful method for making moral decisions as it is applicable to all religions, cultures and beliefs, as all people believe that happiness should be aimed for and pain should be avoided. Furthermore, there is no need for extra knowledge or special wisdom as it is based on common sense and reason, which almost everyone else can do. It also treats everyone as equal, there are no special considerations. As it is worldwide, its usefulness is increased as it isn't exclusive and can be applied by everyone. ...read more.

It leaves no room for individual tastes, or for some people to value highly something that others might think is of no account at all. Lastly, another benefit of Utilitarianism when considering moral decisions is that At times utilitarianism advocates self-sacrifice, honesty and justice - all things that we value in moral terms. It tends to adhere to worldwide ideas on morality. However, it makes people do the right things for the wrong reasons. Furthermore, It treats people as means to an end, which the philosopher Kant was wholly against. In conclusion, I believe that Utilitarianism is a useful method for decision making, as it allows people to have balanced democratic morality that promoted general happiness in society. ...read more.