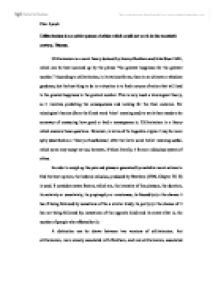 Utilitarianism. Utilitarianism is an unfair system of ethics which could not work in the twentieth century. Discuss.

Utilitarianism is an unfair system of ethics which could not work in the twentieth century. Discuss. Utilitarianism is a moral theory devised by Jeremy Bentham and John Stuart Mill, which can be best summed up by the phrase "the greatest happiness for the greatest number." According to utilitarianism, in its various forms, there is no ultimate or absolute goodness, but the best thing to do in a situation is to find a course of action that will lead to the greatest happiness to the greatest number. This is very much a teleological theory, as it involves predicting the consequences and looking for the final outcome. For teleological theories (from the Greek word 'telos' meaning end) to work there needs to be someway of measuring how good or bad a consequence is. Utilitarianism is a theory which answers these questions. However, in terms of its linguistic origins it may be more aptly described as a 'theory of usefulness', after the Latin word 'utilis' meaning useful, which some may accept as true, however, if taken literally, it forms a ridiculous system of ethics. In order to weigh up the pain and pleasure generated by available moral actions to find the best opinion, the hedonic calculus, produced by Benthem (1789, Chapter IV, II) is used. It considers seven factors, which are, the intensity of the pleasure, the duration, its certainty or uncertainty, its propinquity or remoteness, its fecundity (or the chance it has if ...read more.

Bentham maintained that human beings were motivated by pleasure and pain, somebody with this view can be called a hedonist ('hedone' is Greek for pleasure). He said, "Nature has placed mankind under the governance of two sovereign masters, pain and pleasure. It is for them alone to point out what we ought to do, as well as to determine what we shall do" -Chapter I, I Bentham believed that all human beings pursued pleasure and sought to avoid pain. He this moral fact, as pleasure and pain identified what we should and shouldn't do. Bentham believed pleasure was the sole good and pain was sole evil, making him a hedonist. Once Bentham had established that pleasure and pain wee the important qualities for determining what was moral, he developed the utility principle. This basically states that the rightness or wrongness of an action is determined by its 'utility' or usefulness. Usefulness refers to the amount pleasure of happiness caused by the action. "By the principle of utility is meant that principle which approves or disapproves of every action whatsoever, according to the tendency which it appears to have to augment or diminish the happiness of the party whose interest is in question." This can be shortened to "An action is right is it produces the greatest good for the greatest number." The end that Bentham's theory identifies are those with the most pleasure and least pain. ...read more.

He also identifies the focus on happiness as the cause of the problem. Utilitarianism fails to consider different views on what happiness is. It asserts that there's a common agreement about what brings pleasure and what brings pain. This can be challenged on many levels. Not only do people have different tasted with regards to art, must and literature, but there are even extreme exceptions with regard to physical sensations, for example, there are people who find pleasure in experiencing pain. Therefore, if human beings don't have the same idea of what gives them pleasure and pain, then the premise on which utilitarianism is built severely weakened. A contemporary adherent is Peter Singer, an extreme utilitarian who has done a huge amount of work for animal rights. He argues in 'Practical Ethics' (1993) for a modified view of utilitarianism. He suggests that our ethical decisions should benefit the best interests f those affected, rather than simple pleasure, and that no individuals' interests can be considered more valuable than another's. Many people disagree with Peter Singer because of his severe view and unfortunately this has been the basis on which preconceptions of what utilitarianism is today. Although it provides a persuasive ethical theory, the people of the twenty first century will soon discover that once put into practise, the theory has major faults which, in the society today, are too great to be ignored, therefore not only making utilitarianism an unfair system of ethics but, if taken too literally, a destructive one. Char Ayoub ...read more.