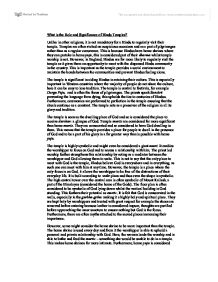 What is the Role and Significance of Hindu Temples?

What is the Role and Significance of Hindu Temples? Unlike in other religions, it is not mandatory for a Hindu to regularly visit their temple. Temples are often visited on auspicious occasions and as a part of pilgrimages rather than as a regular occurrence. This is because Hindus have home shrines where they can partake in home puja, this is considered part of their dharma whilst temple worship is not. However, in England, Hindus are far more likely to regularly visit the temple as it gives them an opportunity to meet with the dispersed Hindu community in the country. This is important as the temple provides a social environment to maintain the bonds between the communities and prevent Hindus feeling alone. The temple is significant in aiding Hindus in retaining their culture. This is especially important in Western countries where the majority of people do not share the culture, here it can be easy to lose tradition. The temple is central to festivals, for example Durga Puja, and is often the focus of pilgrimages. ...read more.

This is not to say that the only place to meet with God is the temple, Hindus believe God is everywhere and in everything, as such one can meet with him at any time. However, the temple is a place where the only focus is on God, it allows the worshipper to be free of the distractions of their everyday life. It is built according to vedic plans and thus even the shape is symbolic. The high central tower over the central area is often symbolic of Mount Kailash, a part of the Himalayas (considered the home of the Gods). The floor plan is often considered to be symbolic of God lying down whilst the vertical building is God standing. This furthers their potential as murtis. It is felt that God is consecrated in the walls, especially in the garbha-griha making it a highly holy and spiritual place. They are kept holy by worshippers and treated with great respect for example the shoes are removed before entering because leather is considered impure, thoughts are purified before approaching the inner sanctum to ensure nothing but God is the focus. ...read more.

If this is considered to be true than the importance of home shrines further highlights the role and significance of temples. The temple is important as a place of offering. Offerings are made at home shrines, and received back as Prasad. Whilst this too occurs in temples, in temples it is possible for people to make offerings such as of money without receiving them back again. Furthermore, ceremonies such as havan are performed. This is the fire ceremony whereupon the fire is considered like a post-box to God. The worshipper throws items such as seeds and ghee into the flames as an offering and act of worship. It is clear that temples have extreme significance in Hinduism. They are valued and respected both as a means of enabling worship in the presence of God and as a way to uphold Indian culture and reunite large and dispersed communities in the west. They enable worship led by priests, perhaps offering more spiritual comfort than worshipping alone at home, whilst providing the chance at darshan and to take part in ceremonies perhaps not possible at home e.g. havan. Therefore the temple is central to Hinduism. Word count 919 ...read more.