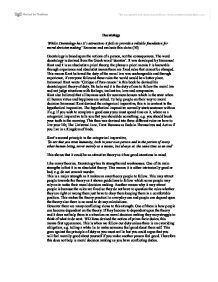 Deontology 'Whilst Deontology has it's attractions it fails to provide a reliable foundation for moral decision making' Examine and evaluate this claim (30) Deontology is based upon the actions of a person, not the consequences. The word deontology is derived from the Greek word 'deontos'. It was developed by Immanuel Kant and it is an absolutist a priori theory, the phrase a priori means it is knowable through experience and absolutist means there are fixed rules that cannot be changed. This means Kant believed the duty of the moral law was unchangeable and through experience, if everyone followed these rules the world would be a better place. Immanuel Kant wrote 'Critique of Pure reason' in this book he devised his deontological theory of duty. He believed it is the duty of one to follow the moral law and not judge situations with feelings, inclination, love and compassion. Kant also believed that all humans seek for summum bonum which is the state when all human virtue and happiness are united. To help people on their way to moral decision Immanuel Kant devised the categorical imperative, this is in contrast to the hypothetical imperative. ...read more.

WD Ross devised the notion of prima facie duties, this means first appearance. This is when we follow our duty unless there is an overriding obligation, e.g. telling a white lie to make someone feel good about them self. This goes against the principle of duty as you must not lie but you could argue that you will feel morally good about yourself if you make another person feel good. Therefore this does not help is moral decision making as you have conflicting duties. Strength to this theory is that justice is always the absolute. This means only intrinsically right actions are accounted for. This can be seen with Kant's statement of good will. 'it is impossible to conceive of anything at all in the world, or even out of it, which can be taken as good without qualification, except good will.' This shows that only good will is the only good we can achieve from the world. By justice being an absolute it means that you cannot justify immoral actions. This is attractive because it shows that by following this theory you will not act unmorally and you will be able to reach that summum bonum as you are fulfilled with good deeds. ...read more.

Again this is wrong because who is to say one right action is another person's right action, this makes it very unreliable with moral decision making. However if you take into account what the majority feel is wrong or right you could come to a conclusion on universal rules. This can be seen with rules such as 'do not commit murder' as most people do not tolerate that and it is safe to say they do not agree with it. Finally another weakness is that Immanuel Kant starts to argue now 'is' to be done but what 'ought' to be done, this is known as the Naturalistic Fallacy. This is a weakness because it makes people feel as he is in control and he is telling what should and shouldn't be done. This is a weakness because Kant has different agreement on morals to another agreement, again he is assuming the masses will agree with this method making unreliable. By Kant saying what ought to be done he is showing what he feels is intrinsically good and that may vary from another. On the other hand by Kant saying he ought instead of is, it shows he is laying down ground rules and some people may like this as they will have rules to follow making it a attractive and reliable moral decision making theory. ...read more.