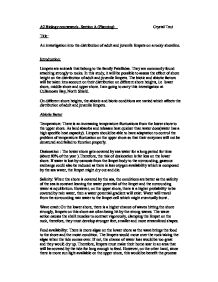 An investigation into the distribution of adult and juvenile limpets on a rocky shoreline.

A2 Biology coursework- Section A (Planning) Crystal Tsui Title: An investigation into the distribution of adult and juvenile limpets on a rocky shoreline. Introduction: Limpets are animals that belong to the family Patellidae. They are commonly found attaching strongly to rocks. In this study, it will be possible to assess the effect of shore height on the distribution of adult and juvenile limpets. The biotic and abiotic factors will be taken into account on their distribution on different shore heights, i.e lower shore, middle shore and upper shore. I am going to carry this investigation at Cullercoats Bay, North Shield. On different shore heights, the abiotic and biotic conditions are varied which affects the distribution of adult and juvenile limpets. Abiotic factor Temperature: There is an increasing temperature fluctuations from the lower shore to the upper shore. As land absorbs and releases heat quicker than water does(water has a high specific heat capacity). Limpets should be able to have adaptation to control the problem of temperature fluctuation on the upper shore so that their enzymes will not be denatured and failed to function properly. Desiccation : The lower shore gets covered by sea water for a long period for time (about 80% of the year ).Therefore, the risk of desiccation is far less on the lower shore. If water is lost by osmosis from the limpet body to the surrounding, gaseous exchange could also be reduced as there is less oxygen availability which is composed by the sea water, the limpet might dry out and die. Salinity: When the shore is covered by the sea, the conditions are better as the salinity of the sea is constant leaving the water potential of the limpet and the surrounding water at equilibrium. However, on the upper shore, there is a higher probability to be covered by rain water, then a water potential gradient will exist. ...read more.

In times of heavy rain these crevices fill up with fresh water. An osmosis gradient will be established because of the differences in water potential between the water within the limpet and the water surrounding it. The fresh water will move in via osmosis as water moves from where it is less negative to where it is more negative. The limpet will be unable control the osmosis because there will be such a steep gradient for the water to move down and the limpet cells will increase in volume so much that the cells will burst and the limpet will die. The juvenile limpets also have a much larger surface area to volume ratio and so water is lost more readily via osmosis. During high temperatures, the limpets may also be at risk of changes in salinity as the high temperatures cause surface water to evaporate, leaving behind the salt. The limpet can only tolerate a certain range of salinity. Unlike adult limpets, the juvenile limpets cannot make a home scar because its shell is not properly formed, because of this there will not be a fully water tight seal to protect the limpets during high temperature. The water contained with in the limpets shell and body cells will move out via osmosis into the surrounding saline environment in an attempt to dilute it. In doing this the limpet will be left without sufficient oxygen for respiration and the body cells will be unable to retain their turgidity. The cells will shrivel up, no ATP will be produced from respiration and the limpets will no longer be able to attach itself to rock and will be left exposed to predator attack. Being further up the shore also exposes the limpets to predators and a lower food supply. Adult limpets can be uncovered for longer as they do not need as much food, because they are no longer growing and they have a larger shell to hold more water. ...read more.

The following can be a food chain to show the organisms affecting limpets. Micro-algae --> Limpets--> Dog whelks As limpets feed on micro-algae, they are likely to be fund where there is a greater percentage coverage of micro-algae .If there are many dog whelks in an area it would be expected that the population of limpets will be decreased as there is high predation. However, due to the low population the number of dog whelks will decrease and then the limpet population will increase again. Also, on the upper shore, there is low seaweed coverage thus there is little protection for prey and more exposure to predator as well as lower food supply, juvenile limpets are less likely to be found on this shore. Summary There are relatively higher proportion of adult limpets than juvenile limpets on the upper shore, however, most limpets are dominated on the middle shore because of the optimum condition there. The harsh conditions exhibited in the lower and upper shore making them undesirable for limpets. The middle shore offers an environment which is less exposed to the sun and predators as well as less at a risk from being crushed when the tide comes in. The middle shore had the greatest number of limpets overall. The lower shore, however provided more protection from predators as there was a vast amount of seaweed cover for the limpets to live under, away from the site of birds and other prey and the lower part of the shore was covered by the water for most of the day which therefore limits the chances of desiccation. In this case there must have been a more dominant factor affecting the distribution, such as the wave crash. The strong waves from the sea could overturn rocks and make it difficult for the limpets to inhabit the sea. lf any limpets had managed to inhabit the area the rocks could crush the limpets due to the fierce action of the waves and therefore decrease their chances of survival. ...read more.