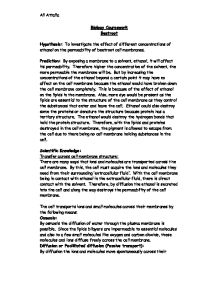 This previous testing provided a basis for a method and suitable equipment that may have been needed for the preliminary and final experiment. For the preliminary work, a similar experiment will be investigating the effects of ethanol on the cell membrane of the beetroot instead of temperature. After completing the temperature investigation, a suitable prediction could be presented by employing the results. To justify length and shape of beetroot, the beetroot shape will be cylindrical because a large surface area to volume ratio would provide more cells exposed to the ethanol. The smaller the length the larger the surface area, however if the beetroot was too small then not enough pigment would be left to analysis. A colourimeter was used for the previous testing on the affects of the temperature and was reliable for statistical information instead of an eye test comparison. The qualitative information given from the colourimeter is precise; therefore a colourimeter will be used for the final experiment with the affects of ethanol on the beetroot membranes. Why ethanol? By studying the effects of ethanol or organic solvents on beetroot cell membranes can give scientists an idea how ethanol or organic solvents may have on a persons cell membrane. From this experiment the cell membrane from the beetroot would show how much ethanol would affect it's cell membrane and the level of damage at what concentration or ratio with distilled water. From the results it would give scientist predictions of the effect of ethanol on a persons stomach or digestive lining. Therefore knowing these effects would help provide a wider knowledge of alcohol on the body's cell membranes and perhaps how to overcome the dangers of drinking. Preliminary Apparatus: * Beetroot * Corer * Ceramic tile * Scalpel * Tweezers * 10 Test tubes * 10 Boiling tubes * Test tube and boiling tube racks * Measuring cylinder 25cm3 * Colourimeter * Cuvettes * Pipette Preliminary Method: * Using a corer, cut strips of beetroot with the corers at 8mm and ...read more.

This wouldn't have had much of an effect on the final results, as only a few molecules of betalain would have leaked because of this. With this particular experiment, it was limiting since only one type of plant cell membrane was considered. Therefore to conclude that all cell membranes act in this way would be incorrect. Different plant cell membrane may be adapted to cope better or worse than beetroot cell membranes. Another limitation was the range of concentrations. To have a better understanding of the effect of ethanol on cell membrane would to conduct a smaller range and then concentrate on where the cell membranes are most affected. This experiment was completed between the ranges 0% and 50%, and the main affect on the cell membrane was between 0% and 20%. Therefore to complete a more accurate result comparison would to have conducted an experiment between these results and then scale it down again to perhaps 10%, 11%, 12%, 13%, 14% and then 15%. This would gain a more specific set of results and a larger comparison to be possibly made. This limitation did not affect the final sets of results. Getting the years results meant that the reliability of the results were high. This in general meant that a correct and accurate mean could be produced. The readings from the colourimeter may have been incorrect because from a human factor using the dial to find 100.0% on the colourimeter was difficult to get exactly. Sometimes the readings of the distilled water would be between 101.3% or 100.5%, which was the closest reading possible to get and keep constantly. But this is not as accurate as it could have been, which would have been 100.0%. This was unreliable as 100.0% shows that there is 100.0% light transmission, which for distilled water it was. But if the figures were below or higher than 100.0%, then the rest of the results would be inaccurate as the light transmission was not at the correct figure. ?? ?? ?? ?? Ali Attalla ...read more.

Overall, this is a very considerable effort on the part of the writer. A great deal of thought has been put in to the overall structure of the report. A lot of experimental work was carried out, notably a very thorough preliminary investigation which proved very valuable.
The only major weakness lies with the analysis of the data collected. This is a very common issue with A'Level assignment reports. IV/DV trends should have been discussed in detail with reference to data points on the graph. Any SD calculations could then have been used to examine the reliability of the final data.
The evaluation section was thorough, but it is important to assess the validity of data by examining in detail whether all the control variables were indeed controlled (kept constant). In practice, this is very hard to do.
Despite these misgivings, this is an impressive piece of work.