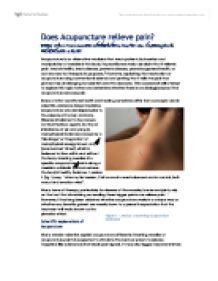 Does Acupuncture relieve pain? Is this form of unconventional alternative medicine anything more than placebo effects? Acupuncture is an alternative medicine that treats patients by insertion and manipulation of needles in the body. Its practitioners variously claim that it relieves pain, treats infertility, treats disease, prevents disease, promotes general health, or can be used for therapeutic purposes.3 However, explaining the mechanism of acupuncture using conventional science and proving that it relieves pain has proved very challenging for scientists over the decades. This coursework will attempt to explore this topic further and determine whether there is any biological proof that acupuncture reduces pain. Ideas of what constitutes health and healing sometimes differ from concepts used in scientific, evidence based medicine. Acupuncture was developed prior to the science of human anatomy. Disease is believed to be caused, not by infectious agents, but by an imbalance of yin and yang (a metaphysical balance) caused by a "blockage" or "stagnation" of metaphysical energy known as qi (pronounced "chee") which is believed to flow within and without the body. Inserting needles into specific acupuncture points along a meridian unblocks qi and restores the body's healthy balance. 2 Jessica L (fig 1) says, "after my first session, I felt so much more balanced and in control, both mood and emotion-wise". Many forms of therapy, particularly for disease of the muscles, bones and joints, rely on the fact that stimulating or needling these trigger points can relieve pain.1 However, it has long been debated whether acupuncture works in a unique way or whether any benefits gained are merely down to a person's expectation that the treatment will work; known as the placebo effect. Scientific explanations of Acupuncture Many western scientists explain acupuncture differently. Inserting needles at acupuncture points is suspected to stimulate the nervous system to release morphine-like substances that block pain signals. It may also trigger neurotransmitters and neurohormones, which influence such dynamic systems as circulation and the immune response. ...read more.

The patients were subjected to pain in the form of a tiny filament used to prick the inside or outside of their upper lip. Initial tests showed via fMRI that all 12 people reacted strongly to the pain stimulus, as there was an increased flow of blood to the subjects' parietal areas and brain stems. Concurrently with being pricked with the filament, seven subjects received traditional acupuncture at the Hegu point, an acupoint located between the thumb and forefinger. The remaining five subjects received electroacupuncture at the Hegu point, with a low-level electrical current being delivered through the needle. During 30 minutes of treatment, the patients rated their pain level on a scale of one to 10 every five minutes, with the fMRI continually monitoring their brains. In four of the seven subjects who received traditional acupuncture (57%), the fMRI showed considerably decreased levels of brain activity associated with the pain. "We found activity subsided in 60 to 70 percent of the entire brain," said Wen-Ching Liu, an assistant professor of radiology at UMDNJ and a co-author of the study. "Interestingly, in each subject, we detected pain-induced activity in different areas of the brain." The response was even greater among those who received electroacupuncture. Pain-related brain activity decreased in all five patients who received electrical stimulation, and those subjects showed a greater tolerance to pain than those who received traditional acupuncture treatment. "We could see the brain activity associated with the pain subsiding even as the patients reported they were experiencing relief," added Dr. Huey-Jen Lee, the study's lead author. Lee noted that since the MRI definitively showed different brain activity, it was highly likely the increased tolerance to pain was real and not a placebo effect. "The brain actually shows differences," Lee said, "and that is convincing." Although the results of the study appear favorable for those who have been looking for proof that acupuncture works, Dr. ...read more.

5 adults in Europe suffers from long-term pain - at least 75 million people.12 A variety of medications are used to treat chronic pain, and a physician can determine which medication is appropriate for the individual patient based on duration and severity of back pain. Acetaminophen and nonsteroidal anti-inflammatory drugs are typically tried first. Opioid medications are also a possibility for those with severe pain, but they should only be used for a short period of time and under supervision by a physician because of the possibility of dependence. Muscle relaxants are frequently prescribed for short-term use in conjunction with acetaminophen or nonsteroidal anti-inflammatory drugs for chronic pain. However, there is no evidence to suggest that muscle relaxants should be used for prolonged periods of time. Antidepressants (i.e., tricyclic antidepressants), benzodiazepines and antiepileptic medications have been studied for use in chronic pain. Exercise Supervised exercise that incorporates stretching and strengthening can be beneficial in managing chronic back pain. Exercise not only improves back symptoms, but it also has overall health benefits. With instruction from a professional, individuals can be taught exercises that centralize symptoms, improve balance, posture and coordination, and relieve muscle tension. Yoga has benefits for chronic back pain. Although there are many specific styles of yoga, most involve a combination of body positions, breathing and relaxation. Regardless of the type of exercise, individuals with chronic low back pain should avoid bed rest and remain active. Physical conditioning in chronic pain patients can have immediate and long-term benefits, according to a new study presented at the American Academy of Pain Medicine 24th Annual Meeting. 13 A frequent comorbid condition of chronic pain is profound physical deconditioning, which results from inactivity. "People with chronic pain don't want to exercise - the main reason is that they are in so much pain," the study's lead investigator, Amy M. Burleson, PsyD, from the Cleveland Clinic Foundation, in Ohio, told Medscape Neurology & Neurosurgery here. "We were hoping this [study] would show people how important exercise is. ...read more.