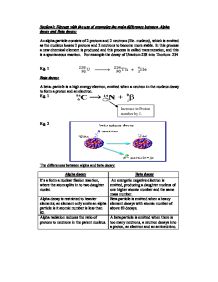 Section1: Discuss with the use of examples the main difference between Alpha decay and Beta decay: An alpha particle consists of 2 protons and 2 neutrons (He- nucleus), which is emitted as the nucleus looses 2 protons and 2 neutrons to become more stable. In this process a new chemical element is produced and this process is called transmutation, and this is a spontaneous reaction. For example the decay of Uranium-238 into Thorium- 234 E.g. 1 Beta decay: A beta- particle is a high energy electron, emitted when a neutron in the nucleus decay to form a proton and an electron. E.g. 1 E.g. 2 The differences between alpha and beta decay: Alpha decay Beta decay It's a form a nuclear fission reaction, where the atom splits in to two daughter nuclei. An energetic negative electron is emitted, producing a daughter nucleus of one higher atomic number and the same mass number. Alpha decay is restricted to heavier elements; an element only emits an alpha particle is it atomic number is less than 82. Beta particle is emitted when a heavy element decays with atomic number of above 82 decays. ...read more.

For example: 24He � 8Be. Later on, once the helium has been used up the star begins a new series of processes; initially combining the carbon nuclei. For e.g.: The production of small amounts of hydrogen and helium makes it possible for the star to synthesise most of the elements. Lithium forms in this way: Lithium:- Section: 3 nuclear fission and nuclear fusion reactions Nuclear fission involves splitting of the nucleus into to two more or less equal fragments. It is bombarding a neutron on to a heavier nucleus to release enormous amount of energy. The production of energy from the nuclear fission can be understood in terms of the curve of binding energy. Where binding energy is the energy released when nucleons are made. Fission of heavy elements is an exothermic reaction which releases large amount of energy both as electromagnetic radiation and as kinetic energy of fragments. For example, if one of the chain reactions produced in this way by nuclear fission reaction is: For this chemical equation, the amount of energy released can be supplied is: This transformation results in a liberation of about 200MeV per uranium atom fissioned. ...read more.

> Many countries are carrying out fusion research because of the failure to reach a breakthrough yet. Advantages and disadvantages of suing nuclear fission: Advantages: > Relatively little fuel is needed and the fuel is relatively inexpensive and available in trace amounts around the world. > Fission is not believed to contribute to global warming or other pollution effects associated with fossil fuel combustion Disadvantages: > Possibility of nuclear meltdown from uncontrolled reaction--leads to nuclear fallout with potentially harmful effects on civilians > Waste products can be used to manufacture weapons > High initial cost because plant requires containment safeguards. Section 4: outline the main challenges that scientists face in developing fusion power stations. 1. The equipment used to contain the energy is too hot to handle. 2. The hydrocarbon films created by the formation of reactive radicals, causes problems as they trap deuterium and tritium (fuels from water) in the walls of the vessel. This means that they are not circulating in the reacting plasma to produce any energy. 3. Because of this, the film gets thicker; it begins to flake off resulting in dust particles which can be absorbed into the plasma, thus affecting the purity and the performance. ?? ?? ?? ?? ...read more.

The essay is very well done. It explains the different concepts to each question posed well and thoroughly. I would perhaps have liked to have seen more comparison to fission reactions in the latter half of the text but only ...

The essay is very well done. It explains the different concepts to each question posed well and thoroughly. I would perhaps have liked to have seen more comparison to fission reactions in the latter half of the text but only a very minor point.

The essay is split into different sections to answer a question so I will treat the analysis accordingly. The differences and explanations of gamma and beta decay are very well done, the table describes the differences well. The candidate should perhaps examine any similarities there may be between the two different decays rather than state all the differences, but this is very well done. The difference between nuclear fission and decay is also explained very well and the candidate is aided by diagrams throughout which helps their points. The entire essay is very correct and well explained. Some words missed in places to give an incorrect meaning to a sentence. Very good overall sections.

Slight grammatical errors in places. Main punctuation, grammar and spelling alongside communication are all to a very high level. Format of the essay is split into clear stages.