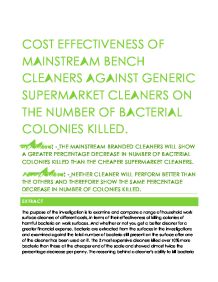 COST EFFECTIVENESS OF MAINSTREAM BENCH CLEANERS AGAINST GENERIC SUPERMARKET CLEANERS ON THE NUMBER OF BACTERIAL COLONIES KILLED. Hypothesis: - THE MAINSTREAM BRANDED CLEANERS WILL SHOW A GREATER PERCENTAGE DECREASE IN NUMBER OF BACTERIAL COLONIES KILLED THAN THE CHEAPER SUPERMARKET CLEANERS. Null Hypothesis: - NEITHER CLEANER WILL PERFORM BETTER THAN THE OTHERS AND THEREFORE SHOW THE SAME PERCENTAGE DECREASE IN NUMBER OF COLONIES KILLED. EXTRACT The purpose of the investigation is to examine and compare a range of household work surface cleaners of different costs, in terms of their effectiveness at killing colonies of harmful bacteria on work surfaces. And whether or not you get a better cleaner for a greater financial expense. Bacteria are extracted from the surfaces in the investigations and examined against the total number of bacteria still present on the surface after one of the cleaner has been used on it. The 3 most expensive cleaners killed over 10% more bacteria than those at the cheaper end of the scale and showed almost twice the percentage decrease per penny. The reasoning behind a cleaner's ability to kill bacteria tends to favour its composing chemicals, although the cleaners tended to be closely related to each other in terms of their ingredients. The 3 best performing cleaners contained alcohols, Benzalkonium Chloride and Tetrasodium EDTA compounds. This would suggest that these are the most favourable chemicals for an effective cleaning product in the household. The worst performing cleaner was based around sodium compounds and water, along with Alkyldimethyl Amine Oxide. Putting further evidence to the ingredients and chemical make up of a cleaning being key to its performance. RATIONALE Food poisoning is a major problem at the minute and is leading to rising numbers of hospital deaths. Deaths caused by MRSA (methicillin-resistant Staphylococcus aureus) and C difficile are continually increasing at alarming rates. C difficile is transmitted through poor surface hygiene and improper cleaning. ...read more.

The structure of wood also leaves it open to withholding water, providing the moisture that bacteria need to multiple. The cleaning products I have selected to use in the investigation are designed for kitchen cleaning, so I will use them where they were designed to be used, and on the kitchen apparatus which takes the most abuse and it's the one thing which is most often blamed for the transmission of bacteria into food, the kitchen chopping board. Swabbing: Mean % decrease = 66.7% Standard deviation = 33 - VERY HIGH (Higher possibility of anomalies) Contact Plates: Mean % decrease = 97% Standard deviation = 4.24 - LOW Swabbing appears to be a more viable option from the trial results obtained. This may be because that contact plates simply cannot pick up the bacteria from the surface on their own. Whereas, with swabbing, the saline may provide moisture to bring the bacteria away from the surface and the swab itself penetrates better into the texture of the surface to pick up a great number of bacterial colonies, on average swabbing pick up more colonies than using contact plates. Contact plates picked up 47 colonies initially, whereas swabbing picked up over 60. This is probably because I can swab a larger area and be more thorough in doing it than when I am using contact agar plates. From experience, a greater number of bacteria picked up initially will mean a smaller percentage error. Because of this, in my main experimental phase I will pipette saline directly onto the area being studied before I swab as the areas appear to be dry and this may be causing fewer bacteria to be picked up initially. MAIN METHOD 1. Using a removable marker or pencil, mark 10 study areas out on the chopping board. I chose to mark out 10 areas because, if I use the same areas for before and after a cleaner is applied, the initial swab may remove a large proportion of the bacteria in the area. ...read more.

It would be appropriate to test the effect of domestic soap combined with water as well as water in isolation on bacterial colonies, to clarify whether the concept of liquids kills bacteria. Many of the cleaners were almost identical in their contents and ingredients, making it difficult to draw scientific conclusions on which chemical complexes have better anti-bacterial properties. In future, it could be possible to use each of the chemical ingredients in isolation to get a true representation of the chemical differences between cleaners and their effect on their performance. Surface cleaners are aimed at killing bacteria that contaminate food and cause infections and food poisoning in humans at body temperature (34�c). I was unable to incubate at this temperature due to the college only having level 2 laboratory status throughout its science department, limiting their resources, including allowing them to culture ant incubate at temperatures up to 25�c. Some of the critical human infection causing bacteria may not grow and culture at these temperatures. They may still grow after the cleaners have been applied, meaning that my tests and experiment were not subjective to the substances being used. In future, I will need to try to acquire the ability to incubate bacteria at 34�c in order to get a truly subjective and real life test for the effectiveness of cleaners. Swabbing the surfaces may not have transferred all the bacteria from the swab onto the agar plate after it had been used to swab the bacteria up from the chopping board, having a detrimental effect on the results of the investigation, showing inaccuracies to the true value. To solve this problem next time I could swab the chopping board as normal, but then soak the swab in sterile saline to remove all the bacteria into the saline and then, after mixing up the solution for 5 minutes, pipette out and spread an amount of the saline/bacteria solution onto the agar plates. ?? ?? ?? ?? ...read more.