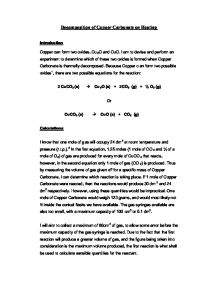 Decomposition of Copper Carbonate on Heating

Decomposition of Copper Carbonate on Heating Introduction Copper can form two oxides, Cu2O and CuO. I am to devise and perform an experiment to determine which of these two oxides is formed when Copper Carbonate is thermally decomposed. Because Copper can form two possible oxides1, there are two possible equations for the reaction: 2 CuCO3 (s) --> Cu2O (s) + 2CO2 (g) + 1/2 O2 (g) Or CuCO3 (s) --> CuO (s) + CO2 (g) Calculations I know that one mole of gas will occupy 24 dm3 at room temperature and pressure (r.t.p.).2 In the first equation, 1.25 moles (1 mole of CO2 and 1/4 of a mole of O2) of gas are produced for every mole of CuCO3 that reacts, however, in the second equation only 1 mole of gas (CO2) is produced. Thus by measuring the volume of gas given off for a specific mass of Copper Carbonate, I can determine which reaction is taking place. If 1 mole of Copper Carbonate were reacted, then the reactions would produce 30 dm3 and 24 dm3 respectively. However, using these quantities would be impractical. One mole of Copper Carbonate would weigh 123 grams, and would most likely not fit inside the conical flasks we have available. ...read more.

* 100 = 0.61% As well as error due to the electronic scales, I also have to take into account that the gas syringe is only accurate to �0.5cm3, and because two readings are to be taken (an initial and final reading) this has to be doubled, so there is a potential error of �1cm3. This would have the greatest effect if the second equation were correct, and only 64cm3 of gas produced. Thus I shall use the following calculation: Percentage Error = (1/64)*100 = 1.56% Combining the two, there is a maximum error of ? 2.17% I think these quantities are a sensible amount to use. They are not so large that disposal becomes a problem, but they are large enough that the possible errors due to equipment limitations remain a very small percentage of the final results. The quantities are also large enough that there is a 16cm3 difference between the two possible expected results, which is a large enough margin that it should be obvious which of the two is correct. Had I used a smaller value, the difference would have also decreased respectively, which could result in the two results being confused due to error in the final readings. ...read more.

6) Attach a gas syringe to the other retort clamp 7) Insert the delivery tube of the bung into the rubber tubing of the gas syringe. 8) The gas syringe should be tilted very slightly, with the plunger end being lower, to counteract any resistance to motion due to friction. 9) The first reading should now be taken from the gas syringe, and then a Bunsen burner applied to the bottom of the boiling tube on the hottest flame until there is no further reaction. 10) Allow three minutes of heating, to ensure all of the copper carbonate has reacted. 11) At this point, it may be advisable to perform the first and second and third repeats of the experiment, as you should allow at least half an hour after each reaction for the gas to cool back to room temperature before taking a final reading. The amount of gas produced can be calculated easily by subtracting the initial reading from the final reading, if this result is close to 80cm3, then it is the first reaction that is taking place, if the result is close to 64cm3 then it is the second. 1 "Science for Conservators: An Introduction to Materials", Page 95, Routledge, 1992 2 Foundation Worksheet F29 (Hills Road Sixth Form College), Pages 1, 4 3 http://ptcl.chem.ox.ac.uk/MSDS/CO/copper_II_carbonate.html - 24/11/05 ...read more.