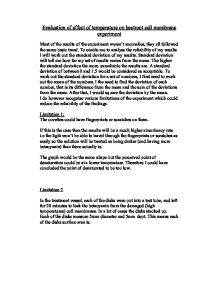 cell membranes. In a lot of cases the disks stacked up. Each of the disks measure 5mm diameter and 5mm dept. This means each of the disks surface area is: 117.7cm� Therefore by using 6 disks the surface area should equal 6*117.7=706.2cm� However if the disks stack up, as shown in the diagram below, the entire surface area will be: 133.4 cm� This is a difference of upto 572.8cm� It is the cells on the surface that are going to leak betacyanin, so a smaller surface are would mean less pigment leaked. Therefore if the disks in my experiment stacked I would make the conclusion that the point of denaturation is higher: Possibly the most important limitation, is the genetic and natural variations of the beetroot. I had to use more than one beetroot in order to cut out the appropriate number of disks for the experiment. ...read more.

Limitation 5 Also there may be a difference in ages of the different beetroot I used. The beetroots develop red colouration during development at maturity, and during senescence. Many plants produce betacyanins as the basis of this colour. I.e the age of the beetroot affects how much betacyanin there is present in the cell vacuole. This means, as I used more than one beetroot, as they could have been different ages there would be a different amount of betacyanin the each cell. This will render the same problems are in limitation 3. This would affect the conclusion because an originally extraneous variable (amount of betacyanin in the cells) has turned into a confounding variable. The conclusions I originally made about the experiment are therefore less reliable. Other limitations include: Room temp change during the experiment Difference in sizes of the disks as they can't be cut exact Different degrees of mechanical damage due to transferring beetroot disks ...read more.