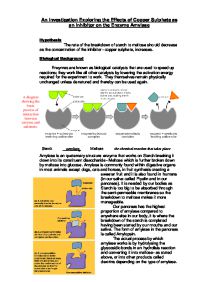 An Investigation Exploring the Effects of Copper Sulphate as an Inhibitor on the Enzyme Amylase Hypothesis The rate of the breakdown of starch to maltose should decrease as the concentration of the inhibitor- copper sulphate, increases. Biological Background Enzymes are known as biological catalysts that are used to speed up reactions; they work like all other catalysts by lowering the activation energy required for the experiment to work. They themselves remain physically unchanged unless denatured and thereby can be used again. Amylase is an quaternary structure enzyme that works on Starch breaking it down into its constituent disaccharide- Maltose which is further broken down by maltase into glucose. Amylase is commonly found within digestive organs in most animals except dogs, cats and horses, in fruit synthesis creating a sweeter fruit and it is also found in humans (in our saliva called Ptyalin and in our pancreas). It is needed by our bodies as Starch is too big to be absorbed through the semi-permeable membranes so the breakdown to maltose makes it more manageable. Our pancreas has the highest proportion of amylase compared to anywhere else in our body, it is where the breakdown of the starch is completed having been started by our mouths and our saliva. The form of amylase in the pancreas is called Amylopsin. The actual process by which amylase works is by hydrolysing the glyscosidic bonds in an hydrolisis reaction and converting it into maltose- as stated above, or into other products called dextrins depending on the type of amylase. ...read more.

Weigh the precipitate and record the mass. Record the different shades of blue in the iodine dimples and record. Repeat the entire experiment once or twice more to allow for anomalies. Independent Variable The varying mol dm-3 of copper sulphate used. Dependant Variable The weight of the precipitates and the colour of the iodine at the end of the experiments. Contol Variables The following are the variables that need to be controlled in order to allow for a fair test and to give accurate results. * The temperature of all the test tubes - the temperature can effect enzyme behaviour by denaturing it at too high a temperature. At certain levels of heat enzymes wok best but once the temperature increase past that point the bonds within the enzyme begin to break down and the enzyme is rendered useless. * The amount of substrate (starch) - the levels of starch are important as they can effect the rate of the reaction. If there is far too few substrates around the experiment would not show an accurate reading as the enzymes aren't being used. However if there is too much substrate the experiment once again slows down as substrate inhibition occurs ( too much substrate fighting for the same enzyme and blocking the path allowing nothing to get through) * The amount of the enzyme (amylase) ...read more.

The weight of the precipitate determines the amount of maltose present If the inhibitor is lowering the enzymes' effectiveness via non-competitive inhibition then that means less maltose will be produced and therefore less precipitate. This theoretical result is reflected in my experiment as shown by the graphs and tables. In regards to the iodine test, the same reflections are made within the colour change- as the level of starch increases due to breakdown into maltose the colour turns from a dark navy indicating that starch is present to a lighter and lighter orange. The next trend is that there is an average decrease in weight of around 0.03 grams for every 0.2 mol dm-3 increase of the inhibitor Copper Sulphate (CuSO4)- apart from at 1mol dm-3 solution where there is a slight increase (see anomalies). Anomalies: Straight off, one can immediately spot two anomalies within the results table and on the graphs -(both the scatter graphs and the bar). On the raw data scatter graph on the second experiment for the third 0.4 % mol solution there is a slight increase in the weight of the precipitate instead of a decrease which reads on the graph as 0.13 (g) and should perhaps be more around 0.11/0.12 (g). A similar anomaly can be seen at 1% molar solution. There, the second reading for that solution reads extraordinarily high at 0.1 grams as apposed to something in the region of 0.04/0.05 grams. ...read more.