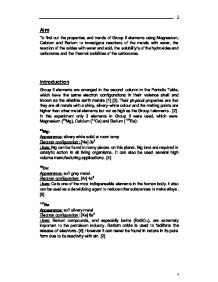 To find out the properties and trends of Group II elements using Magnesium, Calcium and Barium to investigate reactions of the metals with water, the reaction of the oxides with water and acid, the solubility’s of the hydroxides and carbonates and the thermal stabilities of the carbonates.

Group II elements are arranged in the second column in the Periodic Table, which have the same electron configurations in their valence shell and known as the alkaline earth metals [1] [3]. Their physical properties are that they are all metals with a shiny, silvery-white colour and the melting points are higher than other metal elements but not as high as the Group I elements. [2]

In this experiment only 3 elements in Group II were used, which were Magnesium (24Mg), Calcium (40Ca) and Barium (137Ba):

Uses: Mg can be found in many places on this planet. Mg ions are required in catalytic action in all living organisms. It can also be used several high volume manufacturing applications. [4]

Uses: Ca is one of the most indispensable elements in the human body. It also can be used as a deoxidizing agent to reduce other substances to make alloys. [5]

Uses:Barium compounds, and especially barite (BaSO4), are extremely important to the petroleum industry. Barium oxide is used to facilitate the release of electrons. [6] However it can never be found in nature in its pure form due to its reactivity with air. [2]

Experiment 1:  reaction of the metals with water

100cm3 beaker was half filled with water. A small piece of calcium was picked up using tweezers and dropped into the water. Observations were recorded and when the reaction appeared finished, the universal indicator solution was put into the beaker. The universal indicator was used to measure the acidity of the aqueous solution and pH number was recorded along with other observations and recordings.

The same process was followed using magnesium and Barium but the Barium had to be done in a fume cupboard and pH value and other observations were recorded.

The experiment with Barium oxide was still completed in the fume cupboard.

Experiment 4 Thermal stabilities of the carbonates

About a 0.5 cm depth of solid magnesium carbonate was placed in a test tube using a spatula and the equipment was set up as in the diagram below: 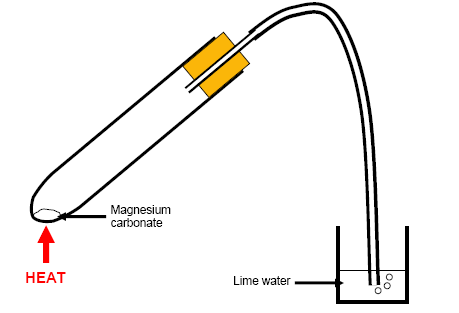 After the experiment, the Bunsen burner was first removed otherwise the limewater would have been sucked back into the test tube, which would result in the glass test tube shattering.

After all the experiments had been completed all the used chemicals were placed into labeled container especially the Barium compounds. All the glassware equipments were rinsed out and left to the original places.

Experiment1:  reaction of the metals with water

These three elements all reacted with water. As the electron shells increased the reaction was more active.

The equations for the reactions were:

All these three oxides reacted with acid and all were neutralized. The pH values were around pH11 when dissolved. Forming cloudy solution when water was added.

The equations of these reactions were:

The balanced equations for the reactions were:

Experiment 4: Thermal stabilities of the carbonates

Sequence of the thermal stabilities of the carbonates:

This experiment didn’t use Barium due to its toxicity and the thermal stability could be predicted, which was less stable than calcium.

The thermal stabilities of the elements decreased as went down the group in the Periodic Table.

The general equation of a carbonate:

The carbonate was decomposed into oxides and carbon dioxide. Carbon dioxide could be detected by lime water.

Lime water (i.e. calcium hydroxide) was used to test the carbon dioxide and the precipitate would produce to prove the existence of carbon dioxide.

Reaction of the lime water

In experiment 4, there was a procedure to detect carbon dioxide by using lime water. Lime water was expected to become turbid once carbon dioxide was produced but in the experiment the lime water did not become turbid at all, this may be because the heating time was too short to enable the air in the test tube to come out. In addition, It also may be because there was not enough or no CO2 produced or there was something wrong with the lime water. Perhaps it was old. [7] To solve this problem, we could use fresher lime water or placed more substances in the test tube to enable there were enough CO2 to come out react with lime water and make it turbid.

Therefore, trends in the properties of alkaline earth metals and their compounds could be concluded as follow: