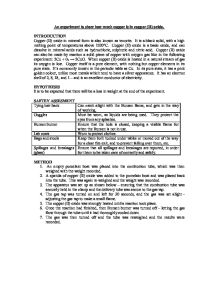 how much copper is in copper oxide

An experiment to show how much copper is in copper (II) oxide. INTRODUCTION Copper (II) oxide in mineral form is also known as tenorite. It is a black solid, with a high melting point of temperatures above 1200�C. Copper (II) oxide is a basic oxide, and can dissolve in mineral acids such as hydrochloric, sulphuric and nitric acid. Copper (II) oxide can also be made by reaction a solid piece of copper with oxygen gas like in the following experiment: 2Cu + 02 � 2CuO. When copper (II) oxide is heated in a natural stream of gas its oxygen is lost. Copper itself is a pure element, with nothing but copper elements in its pure state. It's commonly known in the periodic table as Cu. In its pure state, it has a pink golden colour, unlike most metals which tend to have a silver appearance. It has an electron shell of 2, 8, 18, and 1 - and is an excellent conductor of electricity. ...read more.

3. The apparatus was set up as shown below - ensuring that the combustion tube was securely held in the clamp and the delivery tube was secure to the gas tap. 4. The gas tap was turned on and left for 30 seconds, and the gas was set alight - adjusting the gas tap to make a small flame. 5. The copper (II) oxide was strongly heated until a reaction took place. 6. Once the reaction had finished, then Bunsen burner was turned off - letting the gas flow through the tube until it had thoroughly cooled down. 7. The gas was then turned off and the tube was reweighed and the results were recorded. SET UP OF EXPERIMENT RESULTS Equipment being weighed Weight (grams) Mass of tube 99.56g Mass of tube and copper (II) oxide 100.42g Mass of tube and copper 100.22g Copper (II) oxide - 100.42g - 99.56g = 86g Copper - 100.22g - 99.56g = 66g Loss of weight - 86g - 66g = 20g (mass of oxygen) ...read more.

(http://www.practicalchemistry.org/experiments/finding-the-formula-of-copper-oxide,210,EX.html). It is therefore possible to state that the formula for copper (II) oxide is CuO. EVALUATION If the experiment were to be repeated again I would weigh and burn several times again at the end of the experiment. By checking the weight and re-burning you can see if more copper oxide is released - giving a more accurate result. Also by using a larger amount of copper (II) oxide, you get a larger result, which means a smaller percentage chance of error. Another change that I would make to the experiment is to ensure that there are no gas leaks from the tubing of the Bunsen burner. By coating the outside with Vaseline, it will give a secure seal. It's important to keep the gas running through the tube, to prevent the copper oxidizing. By keeping scales close to the experiment set up it would reduce the chance of any further oxidisation occurring. With many of the previous limitations within this experiment, with more practises, it is possible to gain an accurate result for the percentage of copper in copper (II) oxide. Reference: http://www.practicalchemistry.org/experiments/finding-the-formula-of-copper-oxide,210,EX.html http://www.wikipedia.co.uk ...read more.