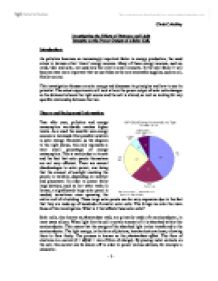 Intensity on the power output of a solar cell.

Investigating the Effects of Distance and Light

Intensity on the Power Output of a Solar Cell.

As pollution becomes an increasingly important factor in energy production, the need arises to harness other ‘clean’ energy sources. Many of these energy sources, such as wind, tidal and solar, are used now but only in small amounts. In the near future it will become even more important that we use these as the non-renewable supplies, such as oil, finally run out.

This investigation focuses on solar energy and discusses its principles and how to use its potential. The actual experiments will look at how the power output of solar cells changes as the distance between the light source and the cell is altered, as well as looking for any specific relationship between the two. 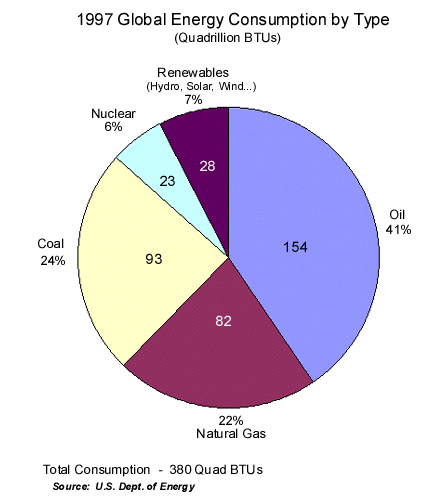 Year after year, pollution and energy consumption worldwide reaches higher levels. As a result the need for new energy sources is increased. One possible solution is solar energy. However, as the diagram to the right shows, this only represents a very small percentage of energy consumption. This is mainly due to its cost and the fact that solar panels themselves are not very efficient. There are several disadvantages to solar power, one being that the amount of sunlight reaching the panels in variable, depending on weather and placement. In order to power fairly large devices, such as hot water tanks in homes, a significantly large solar panel is needed, sometimes even spanning the entire roof of a building. These large solar panels can be very expensive due to the fact that they are made up of hundreds of smaller solar cells.

If more time had been available and if I hadn’t made such a radical change from the preliminary method, I would have investigated further into factors affecting the power output of a solar cell. These factors could have included wavelength of the light hitting the cell, temperature of the cell and the angle at which the light hits the cell. Another variable to investigate would have been the resistance across the cell and how it changed with the distance from the light source. This would be useful, as the variable used in this investigation, the voltage, did not change much at all. Using the resistance instead would give me an opportunity to look for other relationships.

To put the experiment into a social context, this and similar investigations would help in improving the efficiency of solar cells as they would give manufacturers a better idea of which factors that they can control and which factors most affect the final power output. It would also help in determining how best to place solar panels. The most valuable investigation for this purpose would be looking at the angle at which the light hits the cell. Overall this particular investigation has been successful in that it has fulfilled its goals and has shown that there is indeed a specific relationship between distance from the light source and the power output across the solar cell.