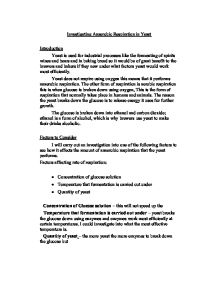 Investigating Anaerobic Respiration in Yeast Introduction Yeast is used for industrial processes like the fermenting of spirits wines and bears and in baking bread so it would be of great benefit to the brewers and bakers if they new under what factors yeast would work most efficiently. Yeast does not respire using oxygen this means that it performs anaerobic respiration. The other form of respiration is aerobic respiration this is when glucose is broken down using oxygen, This is the form of respiration that normally takes place in humans and animals. The reason the yeast breaks down the glucose is to release energy it uses for further growth. The glucose is broken down into ethanol and carbon dioxide; ethanol is a form of alcohol, which is why brewers use yeast to make their drinks alcoholic. ...read more.

I will run the experiment at 5 different temperatures to gather a range of different results. I will repeat the experiment at each temperature 3 times so I can get an average set of results for each temperature which will minimise any accidental errors. The book 'Essential Science' says that the enzyme that breaks down glucose in yeast works best at 37oc and recommends using water baths between 0oc and 400c so my five temperatures will be 200c 300c 370c 400c 450c. This should then generate this sort of graph: Most carbon dioxide will be released when the glucose solution is 370c but ether side of this temperature less glucose will be released. When the temperature differs too much from 370c the enzymes will not function that is why I made the graph start off gradual. ?? ?? ?? ?? ...read more.