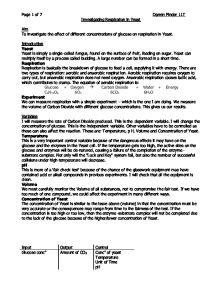 This is not a problem, however. It is to be expected because each column of result was a different experiment. The suitability of the method was very good and clear and was easy to adhere to. There are only two seen improvements - by not being able to control the amount of agitation the yeast solution receives before the experiment may stop the validity of the experiment. The second improvement is that all the equipment should have been washed thoroughly beforehand so that no foreign germs may having effects while the experiment is taking place. To continue with the experiment, I had to make sure I had enough reliable evidence to make a prediction, a reliable experiment and a conclusion. I achieved this by trying a Preliminary Investigation before starting the main one. My hypothesis was correct and results were reliable evidence to suggest a larger experiment would be successful. I learned some safety precautions and method advances after the Preliminary Investigation to ensure a safe and valid experiment. Further work could have been tried to try to enhance the experiments legality. I could have used more experiments on the batch of Yeast to make sure that its contents were 100% pure. I could have used apparatus to agitate each sample of Yeast together so that they are identical to each other. Page 1 of 7 Darren Pinder 11T ...read more.