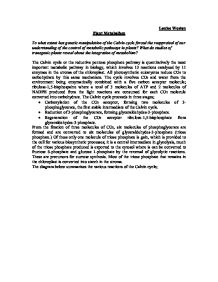 Louise Weston Plant Metabolism To what extent has genetic manipulation of the Calvin cycle forced the reappraisal of our understanding of the control of metabolic pathways in plants? What do studies of transgenic plants reveal about the integration of metabolism? The Calvin cycle or the reductive pentose phosphate pathway is quantitatively the most important metabolic pathway in biology, which involves 13 reactions catalysed by 11 enzymes in the stroma of the chloroplast. All photosynthetic eukaryotes reduce CO2 to carbohydrate by this same mechanism. The cycle involves CO2 and water from the environment being enzymatically combined with a five carbon accepter molecule; ribulose-1,5-bisphospahte where a total of 3 molecules of ATP and 2 molecules of NADPH produced from the light reactions are consumed for each CO2 molecule converted into carbohydrate. The Calvin cycle proceeds in three stages; * Carboxylation of the CO2 acceptor, forming two molecules of 3-phosphoglycerate, the first stable intermediate of the Calvin cycle. * Reduction of 3-phosphoglycerate, forming glyceraldehydes-3-phosphate. * Regeneration of the CO2 acceptor ribulose-1,5-bisphosphate from glyceraldehydes-3-phosphate. From the fixation of three molecules of CO2, six molecules of phosphoglycerate are formed and are converted to six molecules of glyceraldehydes-3-phosphate (triose phosphate.) Of these only one molecule of triose phosphate is gain, which is provided to the cell for various biosynthetic processes; it is a central intermediate in glycolysis, much of the triose phosphate produced is exported to the cytosol where is can be converted to fructose 6-phosphate and glucose 1-phosphate by the reversal of glycolytic reactions. These are precursors for sucrose synthesis. Most of the triose phosphate that remains in the chloroplast is converted into starch in the stroma. ...read more.

When SBPase activity dropped below 15% the very low flux through the cycle led to a decrease in electron transport most likely due to a build up of ATP and NADPH. When SBPase activity was less than 20% wild type chlorosis was observed. Starch levels dropped in these plants with the maintenance of sucrose levels. Decreased expression of plastid FBPase did not affect photosynthesis until 60% of the wild type activity was removed. A flux control coefficient of >0.7 has been predicted for SBPase. However, the inhibition of photosynthesis in antisense transformants has been suggested to be mainly because of an inhibition of stromal conductance and the resulting decrease of intercellular Carbon concentration. If photosynthesis is normalized on [Ci], it is inhibited only marginally by a 30-40% decrease of SBPase activity, indicating that SBPase has a fairly small flux control coefficient for the metabolic processes in the mesophyll. In addition to reducing SPBase activity, cyanobacterial FBP/SBPase has been introduced into tobacco chloroplasts and it has been shown that the overexpression of FBP/SBPase in the chloroplasts of transgenic plants leads to increased photosynthetic capacity in source leaves, carbohydrate accumulation and accelerated growth rate. FBP/SBPase has no homology with FBPase and SBPase genes derived from higher plants and thus is useful in this respect as is less likely to be prone to transgene silencing. Why the increase in photosynthetic activity occurs has been postulated to be due to increased levels of RuBP. Rubisco activase may only bind Rubisco when RuBP occupies the active site, therefore the increased levels of RuBP induced may be followed by the activation of Rubisco and the increase in photosynthesis. It has been proposed that starch accumulation directly inhibits photosynthesis, that the rate of sucrose and starch synthesis limits photosynthesis, and ...read more.

Therefore a decrease in TK in its primary pathway will influence secondary pathways. Alteration in gene expression enables this interaction to be further understood. Along with the inhibition of photosynthesis mentioned previously as TK was reduced there was additionally a decrease in levels of sugars and of aromatic acids and so decreased phenylpropanoid intermediates and lignin. These results demonstrate that there are no major alternative pathways that are able to substitute for plastid TK, and as metabolism and growth are inhibited in response to an unexpectedly small decrease of activity it indicates that TK is co limiting or near rate limiting for several important metabolic pathways. Why this enzyme simply is not expressed in excess has been suggested to be because greater TK activity might lead to an increase of Ery4P, which would be unfavorable to starch synthesis. In addition it was found that decreased Rubsico activity led to a fall in sugars and starch and decreased activity of aldolase, plastid FBPase and SBPase led to a marked decrease of starch but not sugar levels giving examples of integration. Transgenic plants have therefore shown how a change in an enzyme in one pathway can affect another, and particularly the importance of TK as a key determinant of plant metabolism. There have been found no alternative routes to substitute for a decrease in this enzymes level in contrast to many other processes in primary carbon metabolism, which show a high degree of redundancy. Transgenic plants have also revealed the traditional understandings of control in metabolic processes to be false in that a protein does not have to catalyse an irreversible reaction of be highly regulated to exhibit a high level of control over a pathway. ...read more.