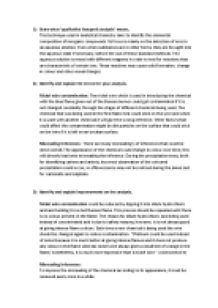 ﻿1. State what ?qualitative inorganic analysis? means. This technique used in analytical chemistry aims to identify the elemental composition of inorganic compounds. Its focus is mainly on the detection of ions in an aqueous solution. Even when substances are in other forms, they are brought into the aqueous state if necessary, before the use of these standard methods. The aqueous solution is mixed with different reagents in order to test for reactions that are characteristic of certain ions. These reactions may cause solid formation, change in colour and other visual changes. 1. Identify and explain the errors for your analysis. Nickel wire contamination: The nickel wire which is used in introducing the chemical with the blue flame given out of the Bunsen burner could get contaminated if it is not changed constantly through the stages of different chemicals being used. ...read more.

This process should be repeated until there is no colour present in the flame. The reason for dilute hydrochloric acid being used instead of concentrated acid is due to safety reasons; however, it is not always good at giving intense flame colours. Each time a new chemical is being used the wire should be changed again to reduce contamination. ??Platinum could be used instead of nickel because it is much better at giving intense flames and it does not produce any colour in the flame whereas nickel wire always gives a small tint of orange in the flame; nonetheless, it is much more expensive than a nickel wire.?? (nichromewire) Misreading Inferences: To improve the misreading of the chemical according to its appearance, it must be renewed every once in a while. ...read more.

For Nickel (II) a blue-green flame colour was observed, however in the table provided this indicates Copper (II); therefore copper (II) was written in the inference box. Nickel (II) sulphate was not dissolved carefully in the deionised water during the ammonia test, which is why it was observed as blue precipitation and that dissolved to give a deep blue solution when excess ammonia was added. Normally, green precipitation is observed and it dissolves to give a blue solution when excess ammonia is added; therefore, copper was written in the inference box which was incorrect. During the silver nitrate test for Iron (III) chloride, cream precipitation was observed and was mistaken for bromide, however the precipitation was white and the actual anion was chloride. In conclusion, the results were conclusive however they had to be repeated several times to ensure accuracy. ...read more.