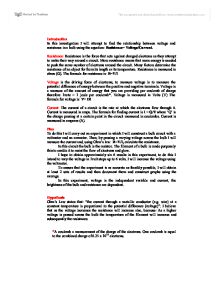 In this investigation I will attempt to find the relationship between voltage and resistance in a bulb using the equation: Resistance= Voltage/Current.

Resistance: Resistance is the force that acts against charged electrons as they attempt to make their way around a circuit. More resistance means that more energy is needed to push the same number of electrons around the circuit. Many factors determine the resistance of an object for from its length or its temperature. Resistance is measured in ohms (Ω). The formula for resistance is: R=V/I

Voltage is the driving force of electrons; to measure voltage is to measure the potential difference of energy between the positive and negative terminals. Voltage is a measure of the amount of energy that you are providing per coulomb of charge therefore 1vote = 1 joule per coulomb*. Voltage is measured in Volts (V) The formula for voltage is: V= IR

Method:(1)The following circuit was set up: 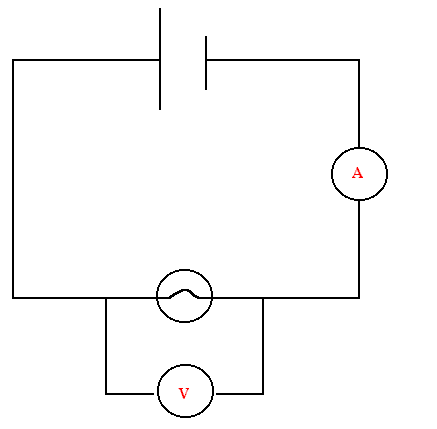 (2)Using the voltmeter to measure, the voltage was increased by adjusting the variable power pack from 0 to 1 volt.

(3)The reading on the ammeter changed, its new reading, at one volt was recorded

(4)Steps 2 to 3 were repeated 5 times, each time increasing the voltage by 1, up to 6 volts. Then the entire experiment was repeated twice so as to obtain 3 sets of results. Then the mean average was calculated then using the formula: Resistance= Voltage/current. The resistance in Ω (ohms) was calculated and recorded. 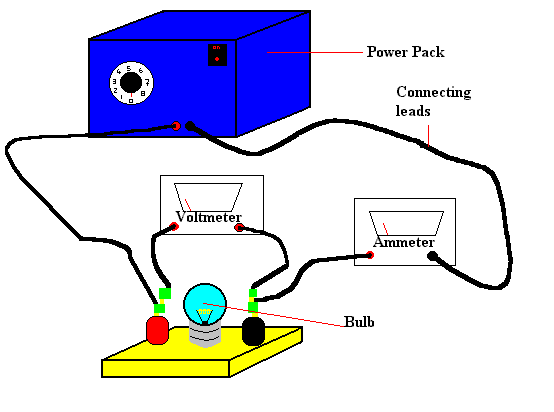 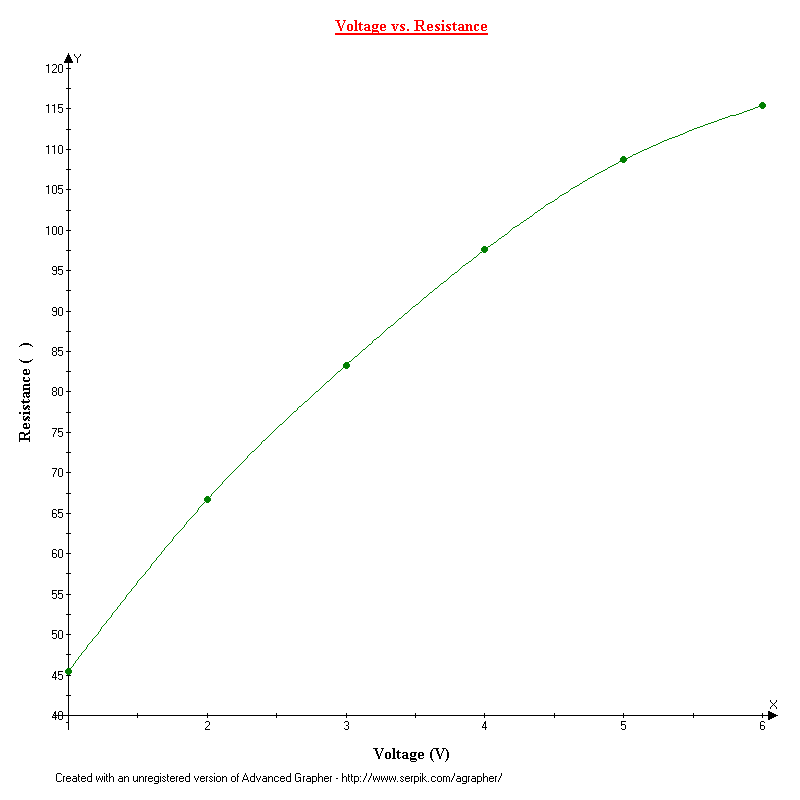 The voltage vs. Resistance decreasing curve graph shows a positive correlation between voltage and resistance, i.e.: as the voltage increases the resistance increases and vice versa.

The only downside with these results was that I could only reliably calculate the resistance to the same level of accuracy as my least accurate measurement, in this case voltage, which could only be measured to one decimal place.

Therefore if I were to do this investigation again, I would change certain aspects of the method and apparatus in order to increase the accuracy and reliability.

Firstly, the reading from the voltmeter could only be taken to one decimal place, limiting the accuracy at which I could reliably state this resistance. To solve this problem I would use a voltmeter whose scale was as accurate to that of the ammeter, 3 decimal places. Preferably I would use digital volt and amp meters that would rule out any human error that might occur when using the naked eye to determining a reading.

Secondly, to increase the accuracy I would obtain more sets of results, perhaps repeat the investigation twice and find an even more accurate average current.