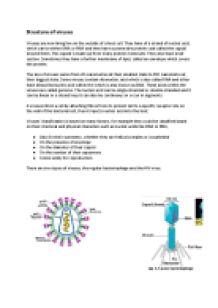 ﻿Structure of viruses Viruses are non-living live on the outside of a host cell. They have of a strand of nucleic acid, which can be either DNA or RNA and they have a protective protein coat called the capsid around them. This capsid is made up from many protein molecules. They also have a tail section. Sometimes they have a further membrane of lipid, called an envelope which covers the protein. The size of viruses varies from 20 nanometres at their smallest state to 300 nanometre at their biggest state. Some viruses contain ribonucleic acid which is also called RNA and other have deoxyribonucleic acid within the which is also known as DNA. These acids within the viruses are called genome. The nucleic acid can be single-stranded or double-stranded and it can be linear or a closed loop it can also be continuous or occur in segments. A viruses infect a cell by attaching fibres from its protein tail to a specific receptor site on the wall of the bacterial cell, then it injects nucleic acid into the host. Viruses? classification is based on many factors, for example they could be classified based on their chemical and physical characters such as nucleic acids like DNA or RNA, * Also On their symmetry, whether they are helical complex or icosahedral ...read more.

under a microscope Example of an imperfect fungus Fungi are really important for decomposition and are a very important in the carbon cycle which is almost a part of life itself. https://eo.ucar.edu/kids/green/images/carboncycle_sm.jpg Fungi and the carbon cycle All types of Fungi secretes enzymes which makes digestion happen on the outside of the fungal body. Fungi together with bacteria are what decompose the earth, in the carbon cycle, they help decompose dead organisms and waste products. Bread mould, yeast and mushrooms are all different types of fungi Fungi and penicillin Penicillin is the most common medicine that we can obtain from fungi; it especially comes from a type of fungi called penicillum. There are also other fungi that can produce antibiotic which is then used to control different diseases. Fungi and food Fungi can be served directly as food ready to eat, for example mushrooms is one of the types of fungi that can be eaten. Mushrooms are not the only type of fungi we eat, some fungi are also used in the production of other types of food like beer, cheeses, wine, bread and some types of soya beans. Difference between different groups of fungi We can find the main difference between the ascomycetes and the basidiomycetes in the way they produce their microscopic spores. ...read more.

than the cell wall in the gram positive bacteria which is about 20 to 20 nm Why do different bacteria have different shapes? Bacteria have different size due to the role of their cell walls which pays an important role in the shape of the bacteria. All bacteria have a cell wall made of a substance called peptidoglycan which is a mesh of peptides and saccharides that provides strength to the bacteria and makes them hard enough. Difference between different groups of fungi We can find the main difference between the ascomycetes and the basidiomycetes in the way they produce their microscopic spores. In the basidiomycetes, the pores are produced externally on the end of specialised cells called basidia. This means we can find them on the outside. Whereas in the Ascomycetes, the spores are produced internally in a sac called ascus wpe1E.jpg (3706 bytes) Ascomycetes wpe1F.jpg (2964 bytes) Basidiomycetes How does bacteria affect white blood cells? Bacteria cells multiply rapidly and they crowd and invade the host tissues and cells, then they kill these cells and tissues. Sometime the bacterial use other methods to cause harm in the bod y by making toxins that will poison and paralyse the cell?s metabolic machinery which stops them from defending the body. This then lead the cells to their destruction http://www.ucmp.berkeley.edu/alllife/eukcell3.gif Picture ...read more.