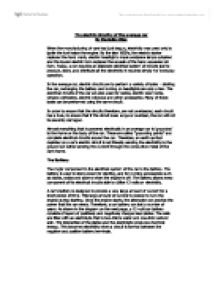 The electric circuitry of the average car.

The electric circuitry of the average car

When the manufacturing of cars had just begun, electricity was used only to ignite the fuel inside the engine. By the late 1920's, the electric starter replaced the hand crank, electric headlights made acetylene lamps outdated and the louder electric horn replaced the squeak of the hand-squeezed air horn. Today, a car requires an elaborate electrical system of circuits just to produce, store, and distribute all the electricity it requires simply for everyday operation.

In the average car, electric circuits are to perform a variety of tasks – starting the car, recharging the battery and turning on headlights are only a few. The electrical circuits of the car are also used for radios, electric door locks, window defrosters, electric windows and other accessories. Many of these tasks can be performed using the same circuit.

Almost everything that is powered electrically in an average car is ‘grounded’ to the frame or the body of the car. These are called "grounding points" and complete electrical circuits around the car. Therefore, an earth symbol depicted on a car’s electric circuit is not literally sending the electricity to the ground but rather sending the current through the conductive metal of the car’s frame.

The major component in the electrical system of the car is the battery. 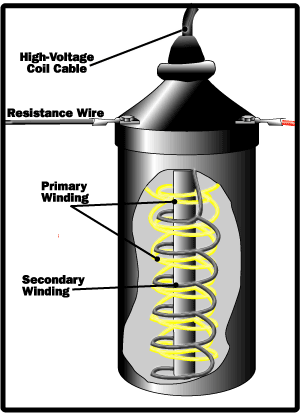 The distributor must distribute the high voltage from the coils to the spark plugs in the cylinders of the engine. This is done by the cap and rotor, which are contained in the distributor. The coil is connected to the rotor, which spins inside the cap. This creates an electric pulse, which arcs across the small gap between the rotor and the contact wire (they don't actually touch). The pulse then continues down the wire of the circuit to the spark plug on the appropriate cylinder.

The spark plug forces electricity in the circuit to traverse a gap.

The various switches allow the headlights to be used in different ways. When the main lighting switch completes the circuit to the headlamps, the low beam lights the way for city driving and for use when meeting oncoming traffic on the highway. When a dimmer switch is activated, the single filament headlamps go "on," along with the high beam of the two filament headlamps. The next activation of the dimmer switch returns the head lighting system to low beams only on the two filament lamps.

The electrical circuits of an average car enable the driver to perform many tasks easily. Processes such as ignition and starting the engine, recharging the battery and turning on the headlights of the car have improved as time has passed, and will continue to be improved and modernised in the future.