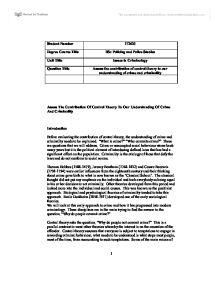 Student Number 172620 Degree Course Title BSc Policing and Police Studies Unit Title Issues in Criminology Question Title Assess the contribution of control theory to our understanding of crime and criminality Assess The Contribution Of Control Theory To Our Understanding Of Crime And Criminality Introduction Before evaluating the contribution of control theory, the understanding of crime and criminality needs to be explained. "What is crime?" "Who commits crime?" These are questions that we will address. Crime or unaccepted social behaviour stems back many years but it is the political element of introducing defined laws that has had a significant effect on the population. Criminality is the etiology of those that defy the laws and do not conform to social norms. Thomas Hobbes (1588-1679), Jeremy Bentham (1748-1832) and Cesare Beccaria (1738-1794) were earlier influences from the eighteenth century and their thinking about crime gave birth to what is now known as the 'Classical School'. The classical thought did not put any emphasis on the individual and took everybody as being equal in his or her decision to act criminally. Other theories developed from this period and looked more into the individual and social causes. This was known as the positivist approach. Biological and psychological theories of criminality tended to take this approach. Emile Durkheim (1858-1917) developed one of the early sociological theories. We will look at this early approach to crime and how it has progressed into modern criminology. These disciplines are in the main trying to find the answer to the question, "Why do people commit crime?" Control theory asks the question, "Why do people not commit crime?" This is a parallel contrast to most other theories whereby the interest is on the causation of the offender. Control theory assumes that everyone is subject to temptations to engage in rewarding criminal behaviour, what needs to be understood is what stops most people, most of the time, from succumbing to such temptations. ...read more.

In 1961 sociologist Walter C. Reckless proposed Containment Theory, which explains delinquency as the interplay between two forms of control known as inner (internal) and outer (external) containments. Containment theory assumes that for every individual a containing external structure as well as a protective internal structure exist. Both buffer, protect, and insulate an individual against delinquency. Reckless wanted his theory to explain not only delinquency, but also conformity. Containment theory shows that society produces a series of pulls and pushes toward the phenomenon of delinquency. It suggests that these inner and outer containments help to buffer against one's potential deviation from legal and social norms and work to insulate a youth from the pressures, pulls, and pushes of deviant influences. Of the two, Reckless suggested that inner containments are more important. It is these inner containments, he argued, that form one's support system. The stronger one's inner containments, the least likely one would commit crime; the weaker one's inner containments, the more prone to crime one would become. Inner containments, simply put, are "self" components. They are the inner strength of one's personality. These include a good self-concept, strong ego, well developed conscience, high sense of responsibility, and high frustration tolerance. Outer containments refer to one's social environment. These are normative constraints in which society and groups use to control its members. Outer containments include belonging (identification with the group), effective supervision, cohesion among group members (togetherness), opportunities for achievement, reasonable limits and responsibilities, alternative ways and means of satisfaction, reinforcement of goals, norms values, and discipline. Internal pushes are personal factors, which include restlessness, discontent, rebellion, anxiety, and hostility. External pulls include deviant peers, membership in a deviant/criminal gang, and pornography. Finally, external pressures refer to the adverse living conditions which give rise to crime. These include relative deprivation, poverty, unemployment, insecurity, and inequality. The most influential version of control theory is that of Travis Hirschi presented in a book titled "Causes of Delinquency." ...read more.

Statistics would suggest that age has a significant contribution to the cause of criminality. Many people who offend at this age still offend throughout their lives and others start up again several years later in life. One simple explanation for this age factor might be down to the more stringent punishments that are delivered to persons who are over eighteen years and that this alone brings halt to many offenders. On the gender issue, it is generally regarded that males commit more crime than females, especially that involving violence. If a female does commit crime it could be seen as being doubly deviant as her behaviour is also against that of social norms. Ann Lloyd. It would therefore suggest that a female would need to have lower self control than a male. Control theories purport that females tend to be more carefully watched over in their childhood years and that this allows there self control to be developed and thus not want to indulge in deviant acts. The race debate seems to be less able to be defined by control theory and suggests only that the self control element is the only invariant. Other sociological theories try to address the race debate with more explanation. (Anomie and Strain Theory). Overall the control theories offer a good assessment of the majority crimes and those who commit them, young males. In asking, why do we not commit crime, the theory purports that we are all capable of criminality, but that most of us have internalised controls to prevent non conformity. The theory does not offer adequate explanation for individual propensities and for violent crimes. The theory does propose an explanation for the causation of criminality, self control, this being at an early age and due to ineffective parenting. This is similar to other theorists (David Farrington) and somewhere that public policies should direct their attentions. If a young person can be guaranteed a stable and caring environment then there may be a diminution of criminals and a proliferation of socially accepted adults. ...read more.