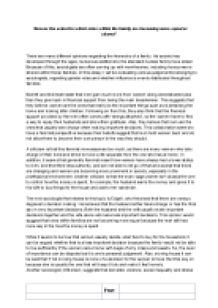 ﻿?Assess the extent to which roles within the family are becoming more equal or shared? There are many different opinions regarding the hierarchy of a family. As society has developed through the ages, numerous additions to the standard nuclear family have arisen. Because of this, sociologists are often coming up with new theories, including how power is shared within those families. In this essay I will be evaluating various judgements belonging to sociologists, regarding gender roles and whether influence is evenly distributed throughout families. Barrett and McIntosh state that men gain much more from women doing domesticated jobs than they give back in financial support from being the main breadwinner. This suggests that they believe women are the ones that really do the important things such as maintaining the home and looking after children. Following on from this, they also think that the financial support provided by the men often comes with ?strings attached?, so the women have to find a way to repay their husbands and show their gratitude. Also, they believe that men are the ones that usually take charge when making important decisions. ...read more.

So, the level of importance can be disputed as it is one?s personal judgement. Also, moving house it can be said that if not moving house is more of a decision for the woman to have the final say on because she is usually the one that will keep it tidy and make it feel homely. Another sociologist, Wilkinson, suggests that domestic violence, social inequality and stress are connected. He believes that social inequality gives rise to stress, which in turn, causes domestic violence. Using this notion, his reasoning is that people with low income or poor/overcrowded accommodation are more susceptible to domestic violence. Worries concerning little money and how to spend it on bills, food and other necessities lead to an overload of emotions, causing the person to react in the only way they feel possible: to let all the anger out. Although Wilkinson is not typically a Marxist, he seems to have a Marxist perception in the sense that he believes the social inequalities are caused by the economy. A criticism of Wilkinson?s idea is that he assumes that all violence is caused by stress, when there are other theories, such as the person having genes that makes them violent or that they just have insecurities, which leads to violence. ...read more.

There are numerous families that have a spouse staying at home in order to perform domestic tasks and look after children who may not be old enough to go to school. Therefore, their view excludes many people. Also, some families do not spend their money on fast food, as they take a healthy approach to food. In conclusion, there are various factors that affect roles within the family, and everyone has a different opinion as to whether they are becoming more equal. The sociologists that believe roles within the family are becoming more shared are Young and Willmott, and Silver and Schor, whereas Barrett and McIntosh, Edgell, and Wilkinson disagree. Taking this into consideration, it seems that while roles are becoming more equal, there is still a long way to go as parts of society are still patriarchal. However, it can be argued that the progress that role equality is so great that it should overshadow the areas that still have one spouse or partner in charge, as society has developed so much since wives were practically seen as property of their wives worldwide, where it is only in areas and environments now. Page ...read more.

This essay aimed to evaluate whether roles within the family are becoming more equal. The writer did well to identify authors on both sides of the argument, and illustrate their key points. The work could have been improved by giving a few more current examples of roles being similar/still divided.
Remember to give the year of the authors referred to and proofread carefully to pick up grammatical errors.
4/5