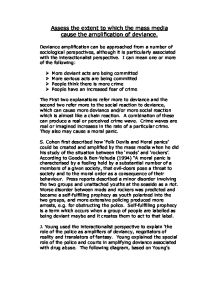 Assess the extent to which the mass media cause the amplification of deviance.

Assess the extent to which the mass media cause the amplification of deviance. Deviance amplification can be approached from a number of sociological perspectives, although it is particularly associated with the interactionalist perspective. I can mean one or more of the following: > More deviant acts are being committed > More serious acts are being committed > People think there is more crime > People have an increased fear of crime The First two explanations refer more to deviance and the second two refer more to the social reaction to deviance, which can cause more deviance and/or more social reaction which is almost like a chain reaction. A combination of these can produce a real or perceived crime wave. Crime waves are real or imagined increases in the rate of a particular crime. They also may cause a moral panic. S. Cohen first described how 'Folk Devils and Moral panics' could be created and amplified by the mass media when he did his study of the situation between the 'mods' and 'rockers'. ...read more.

E. Lemert distinguished primary deviance, which nearly everyone committed and usually went unnoticed or had no consequence, from secondary deviance, which resulted in labelling the person as a deviant. He argued that social reaction could be a cause of secondary deviance rather than a response to it. He applied this approach to show how social reaction amplified mental illness and stuttering. S. Hall provided a Marxist context for the moral panic about mugging in the 1970's. He supports the interactionalist approach described above but adds that the moral panic, which falsely identified street crime as black crime with white victims, distracted the public from the economic crisis. It divided the working class on ethic lines and legitimized. One recent example of a moral panic was the case of the James Bulger murder in the early 1990s. Two 11-year-old boys, Robert Thompson and Jon Venables abducted James from a shopping precinct in Liverpool. They walked him two miles through crowed streets to a railway line, where from essaybank.co.uk they inflicted massive injuries resulting in his death. ...read more.

This prompted demands for tighter controls, curfews for young people and stricter laws. However, other statistics showed that juvenile crime had indeed dropped, these were dismissed by the authorities because claiming the figures a misrepresentation and only appeared so due to a reduction in numbers in the juvenile population. Functionalism does discuss moral panics and the effects of social reaction. However, the approach is structuralist (rather than interactionalist) and there is, as expected, an emphasis on how consensus can be maintained (rather than on underlying conflict between groups). Durkheim saw the function of social reaction against crime and criminals as a way of reinforcing the collective consciousness. K. Erikson followed Durkheim and argued that the witch hunts conducted by the authorities in Puritan New England helped to clarify and reinforce norms of behaviour. The moral panic was an invention as the Puritan society was very conformist and displayed little real deviance which could be transformed into a moral panic. ...read more.