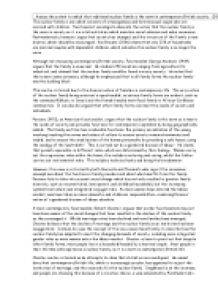 ﻿Assess the extent to which the traditional nuclear family is the norm in contemporary British society. (30) The nuclear family is one which consists of a monogamous and heterosexual couple who are married with children. Functionalist sociologists advocate the notion that the nuclear family is the norm in society as it is a vital institution which maintain social cohesion and value consensus. Postmodernists, however, argue that society has changed, and the structure of the family is now diverse, which should be encouraged. Ken Browne (2006) claims that only 22% of households are married couples with dependent children, which indicates the nuclear family is no longer the norm. Although not discussing contemporary British society, Functionalist George Murdock (1949) argues that the family is universal. He studied 250 societies ranging from agricultural to industrial, and claimed that the nuclear family could be found in every society. He noted that there were some variances, although he emphasized that in all family forms the nuclear family was the building block This can be criticized due to the diverse nature of families in contemporary life. The very notion of the nuclear family being universal is questionable, as various family forms are evident, such as the communal Kibbutz in Israel, and the female headed matrifocal family in African-Caribbean communities. ...read more.

Reconstituted families are an increasingly common. More children are experiencing co-parenting, where they spend half their week with their mothers and step-fathers, and the other half with their father and step-mother. Sociologists call this a bi-nuclear family, and it operates as a one family structure as far as children are concerned. De?Ath and Slater (1992) agree this type of family is increasingly common, but suggest there are many tensions and complications that can emerge. The Tory government appears to believe that the nuclear family is the aspiration for most of ?mainstream society?. Whilst in opposition in 2009, they proposed tax breaks for married couples, to encourage Mothers to stay at home and engage in domestic and childcare duties. Tories appear to regard marriage and the nuclear family as the norm, with traditional conjugal roles, although they claim this isn?t an option for some due to low incomes. However, Katherine Rake (2009) believes any efforts to save the nuclear family from decline is futile, due to the diverse nature of families today. Functionalist theorists are reductionist as they reduce the complex relationship of family to the functions which the family provides for societies. Functionalist arguments are also biologically deterministic as they assume Mothers have a maternal instinct, and their roles are limited by this, which does not account for the diversity of family forms and choices that people now make. ...read more.

The New Right, a more contemporary and politically motivated ideology, agrees with functionalism that the nuclear family best fits the needs of society. However, Murray (1989) bemoans the decline of the nuclear family, claiming this has lead to moral decline and the emergence of an underclass. The increase of lone-parent families, according to Murray, provides no functions for society, and he advocates a return to the traditional family form, with clear and segregated gender roles. Murray, however, can be criticized for being ethnocentric, as he is a white, middle class, American academic, who is judging social change and new family forms as unacceptable. This is value-laden, and no empirical evidence can be forwarded to support the idea that lone-parent families are to blame for moral decline. Rather, it is structural causes. In conclusion, whilst it is fair to say in the past the familial ideology of the nuclear family has been the norm, social change has meant a growing diversity of family types. However, Chester may be correct in saying that everyone has had some experience of a nuclear family, which can still be seen in many working class areas and among ethnic minority groups. But, with the growing acceptance of difference and relationships based on love and choice, we may see further evidence of diversity in the future. ...read more.