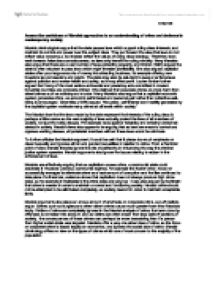 Assess the usefulness of Marxist approaches to an understanding of crime and deviance in contemporary society Marxist criminologists argue that the state passes laws which support ruling-class interests, and maintain its control and power over the subject class. They put forward the view that laws do not reflect value consensus, but instead reflect the values of ruling class ideology. Therefore, laws work towards false class consciousness, as laws only benefit the ruling minority. Many Marxists also argue that there are a vast number of laws protecting property, and Snider (1993) argued the state is often reluctant to pass laws which might threaten profitability. She also argued capitalist states often pour large amounts of money into attracting business; for example offering new investors tax concessions and grants. The state may also be reluctant to pass or enforce laws against pollution and worker health and safety, as it may affect profit. Lauren Snider further argued that 'many of the most serious anti-social and predatory acts committed in modern industrial countries are corporate crimes'. ...read more.

He said crime should not be attempted to be eliminated completely, as society needs it in order to maintain acceptable limits. Marxist arguments also place an endue amount of emphasis on corporate crime, as Left realists argue. Crimes such as burglary and other violent crimes cause much greater harm than Marxists imply. Victims of crime are completely ignored in the Marxist analysis of crime; the harm done by offenders is not taken into account, and as victims are often drawn from less well-off sections of society, the consequences of these crimes can perhaps be more devastating than if a person from higher social strata was targeted. Marxists offer a very one sided view of crime, as the focus on corporate crime is based largely on economics, and ignores the social side of crime. Marxist criminology offers no view on the types of crimes which are of most concern to the majority of the population. The 'full social theory of deviance', put forward by Taylor, Walton and Young argues that rather than just focussing on structural reasons; individual motivation should also be considered. ...read more.

Labelling theorists interpret deviance as a process of interaction between deviants and non-deviants. For example minor acts of childhood deviance may be regarded as harmless in an affluent area, but in less affluent areas they might be seen as evidence of tendencies towards teenage anti-social behaviour. Once a child is labelled a delinquent, they may consequently be considered untrustworthy by teachers and prospective employers. Howard Becker argued 'deviant behaviour is behaviour that people so label.' He also said that a person's dress, manner of speech or ethnicity could be the key factors that determine whether or not the deviant label is applied. The Marxist perspective on crime is useful to the extent of determining crime in economic terms. However, it places undue emphasis on corporate crime. It also argues that the state passes laws only to benefit the ruling classes, however, this theory neglects the fact that the majority of laws are made to protect the lives of the whole population. Crime covers a huge variety of forms of activity-from minor crimes such as petty theft, to mass murder. Due to this, it is difficult to produce a single theory that would account for all forms of crime. ?? ?? ?? ?? Emily Kaill ...read more.