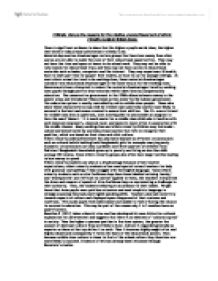 Critically discuss the reasons for the relative underachievement of ethnic minority pupils in Britain today There is significant evidence to show that the higher a pupils social class, the higher their level of educational achievement is likely to be. Material depravation disadvantages certain groups that have less money than other and so are not able to make the most of their educational opportunities. They may not have the time and space at home to do school work. They may not be able to raise money for educational trips; and they may not have access to educational materials such as books, computers and the internet. They may experience ill health, have to work part-time to support their studies, or have to car for younger siblings. As most ethnic minorities tend to be working-class, these material disadvantages translate into educational disadvantages in the same way as for the working class. Governments have attempted to reduce the material disadvantages faced by working class pupils through positive discrimination which takes form by compensatory education. ...read more.

Ethnic minority students are also at a disadvantage because of low teacher expectations, ethnic minority students often need special trained teachers for help with grammar and spelling if they struggle with the English language. Some ethnic minority students such as afro Caribbean boys have been labelled as being 'unruly,' and 'disrespectful' and 'difficult to control' applied to them, the teachers interpreted the dress and manner of speech of Afro-Caribbean boys as representing a challenge to their authority. Thus, the students behaving in accordance to their labels. Wright found that Asian pupils were paid less attention and used simplistic language in wrongly assuming they had poor English speaking skills. Teachers also lack sensitivity towards aspects of culture and displayed open disapproval of their customs and traditions. This made pupils feel undervalued and unable to feel of having the chance to succeed in education. This may be part of the reason why 1 in 3 muslims have no qualitfications. Bourdieu P (1977) takes a Marxist view and has developed his own distinctive cultural explanation for achievement and suggests that there is an element of 'cultural capital' in society. ...read more.

Sociologists have argued that what is taught in schools via the curriculum disadvantages the working class and ethnic minorities as the knowledge they encounter at school does not identify with their own cultural experiences. Coard (1971) showed how the content of education also ignored black people. The people who are acclaimed tend to be white, whilst black culture, music and art are largely ignored. Coard argued that this lead to low self-esteem amongst black pupils. However, this assertion was ridiculed by both the Swann Report (1985) and the Stone (1981) who noted that, despite feeling discriminated against by some teachers, West Indian children had been able to maintain an extremely positive image. The National Curriculum has also been criticised for being ethnocentric - emphasising white middle class culture at the expense of other cultures - especially in its focus on British history and literature. Also, addressing 'multicultural education' which acknowledges the contribution of all of the worlds cultures, however has been criticised for only focusing only on external factors and failing to address the real problem of racism. Ethnic minority languages still do not have the same status as European languages and schools are still required to hold Christian assemblies. ...read more.