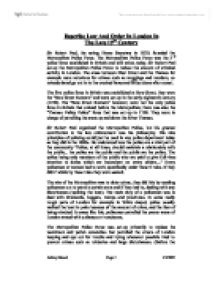 Describe Law And Order In London In The Late 19th Century.

Describe Law And Order In London In The Late 19th Century Sir Robert Peel, the acting Home Secretary in 1829, founded the Metropolitan Police Force. The Metropolitan Police Force was the 3rd police force established in Britain and still exists today. Sir Robert Peel set-up the Metropolitan Police Force to reduce the amount of criminal activity in London. The areas between Fleet Street and the Thames for example were notorious for crimes such as muggings and murders, so nobody dared go out in to the crooked lanes and filthy slums after sunset. The first police force in Britain was established at Bow Street, they were the "Bow Street Runners" and were set-up in the early eighteenth century (1749). The "Bow Street Runners" however, were not the only police force in Britain that existed before the Metropolitan; there was also the "Thames Valley Police" force that was set-up in 1798. They were in charge of patrolling the areas up and down the River Thames. Sir Robert Peel organized the Metropolitan Police, but his greatest contribution to the law enforcement was his philosophy. His nine principles of policing could just be used in any police department today as they did in the 1800s. ...read more.

The result of overcrowded markets, deprivation, poverty, and a growing difference between the rich and poor was the creation of new kinds of crime. As London approached the 1840's crime increased to new heights and it was the job of the Metropolitan Police Force to deal with it. The Metropolitan had to deal with crimes such as pick pocketing, garrotting, muggings, and robberies, and murders such as poisonings. Pick pocketing was a very popular crime that was committed. The criminals committing this crime were often by children around the age of five. The children walked through crowded markets and squares where they were not seen, and picked valuables out of people pockets. Because theses children were so small and light, they did not get caught and often got away from the victim without them realising. The Metropolitan Police could not really do anything to stop this crime, it was happening at such a high rate. Another popular type of murder that the Metropolitan Police had to deal with was poisonings. Poison was quite a popular weapon for murders because it was cheap, and easy to get. Arsenic was a popular poison used, it was meant to be rat poison, but if there was a big enough concentration of arsenic then it most defiantly had the strength to kill some one. ...read more.

The best example of how forensic science was used is when John Toms was convicted of murder in 1884 because the torn paper he used for his pistol wadding was the same as that found in the head wound of his victim. Even though The Metropolitan Police Force improved greatly in the late nineteenth century, however we must realise that back in the 19th century they did not have the technology that we have today, such as DNA testing, and there were many other investigating techniques that were yet to be discovered. Apart from this I think that the Law and Order in London during the late 19th century was very good. It was very well organised and structured and was set to a decent standard. The Metropolitan Police Force were successful in keeping the Law and order in London low because soon after the Metropolitan Police Force was established the "sky high" crime rates started to decline (street crime), but the amount of burglaries stayed the same. The Metropolitan were also responsible for the more "orderly" streets that were achieved and maintained during the second half of the nineteenth century. Another reason that the Metropolitan Police Force were so successful in keeping Law and Order in London is because they are the oldest police force in Britain and are still around patrolling the streets of London. Ashley Breed Page 1 5/1/2007 ...read more.