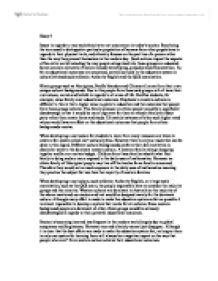 Essay 3 Issues in regards to race and ethnicity are not uncommon in today's society. Race being the term used to distinguish a particular population of humans from other populations in regards to their physical traits, and ethnicity focuses on the past ties of a person rather than the way they present themselves in the modern day. Such notions impact the aspects of the entire world including the way people categorized into those groups are educated. Some common elements of racism include stereotyping, prejudice and ethnocentrism. As far as educational outcomes are concerned, certain curricula in the education system is culturally biased such as Senior Authority English and the QCS examination. ...read more.

Ultimately instances of other such higher rated values would have an affect on the educational outcomes that people from ethnic backgrounds receive. When developing a curriculum for students to learn from many measures are taken to create a fair system which isn't culturally bias. However there is only so much that can be done in this regard. Different cultural backgrounds perform their daily activities in dissimilar ways to the dominant western culture. A western family may go shopping together and be on a certain budget. Children from these families absorb what their family is doing and are more exposed to the daily uses of mathematics. However an ethnic family of Aboriginal people may live off the land as far as food is concerned. ...read more.

Western cultures are dominant in Australia so the majority of the above mentioned curriculum and test would be designed mainly for the dominant culture. Although every effort is made to make the education system as fair as possible it is almost impossible to develop a system that works for all cultures. Since western background people are dominant all other ethnic groups would be seriously disadvantaged in regards to their potential educational outcomes. Racism is becoming less and less frequent in the modern world largely due to global acceptance and forgiveness. However race and ethnicity cannot just disappear. Although it is clear that the best efforts are made to make the education system fair, as long as there is only one system for learning there will always be a negative impact on the way that people who aren't from western culture achieve their educational outcomes. ...read more.