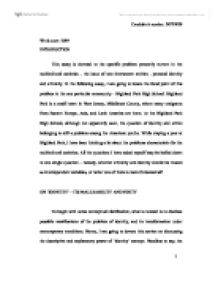 The issue of two interwoven entities - personal identity and ethnicity

Word count: 3,994 INTRODUCTION This essay is devoted to the specific problem presently current in the multicultural societies - the issue of two interwoven entities - personal identity and ethnicity. In the following essay, I am going to locate the focal point of this problem in the one particular community - Highland Park High School. Highland Park is a small town in New Jersey, Middlesex County, where many emigrants from Eastern Europe, Asia, and Latin America are there. At the Highland Park High School, although not apparently seen, the question of identity and ethnic belonging is still a problem among the American youths. While staying a year at Highland Park, I have been thinking a lot about the problems characteristic for the multicultural societies. All the questions I have asked myself may be boiled down to one single question - namely, whether ethnicity and identity should be treated as interdependent variables, or rather one of them is more fundamental? ON 'IDENTITY' - ITS MALLEABILITY AND FIXITY To begin with some conceptual clarification, what is needed is to disclose possible ramifications of the problem of identity, and its transformation under contemporary conditions. Hence, I am going to devote this section on discussing the descriptive and explanatory power of 'identity' concept. Needless to say, the "identity" concept is embroiled in many controversies and especially recently encourages many debates. However, within the confines of my present essay, I will restrain my analysis to two basic dimensions usually linked to this category. As I see it there are two crucial features attributed to identity expressed by pairs of oppositions: the opposition of solidity and fluidity as regards its nature which seems to be parallel to fixity vs. changeability of identity, to its uniformity vs. its variability, etc. Identities: Collective or individual? It is important to mention that the different uses of the identity should be singled out. ...read more.

This type of the ethnic ideology could be named by the term "Salad bowl". It is important to emphasize, that this "Salad bowl" ideology stresses the separateness of the ethnic groups. This ideology put together with the melting pot ideology gave birth to another ethnic ideology often described as "Stew and Stir Fry". This is a metaphor by which one should understand that "the ethnic groups when blend together or come in contact with each other, they are better than all original ingredients alone"(Kelley). Based on the "Stew and Stir Fry" metaphor, the main goal is that each group will become richer and more resourceful, and yet each will maintain the integrity of the original group. However, what is significant here is not the exact description of each ideology itself, but an attempt to associate these ethnic ideologies with the features of one's identity i.e. its weakness and strength. I assume that teens have been equally exposed on these dominant societal ideologies, but their influence on students depends on their individual profiles of identity. Thus, the 'melting pot' ideology can be attributed to a very weak, flexible identity as far as newcomers are concerned. Those, who are characterized by such an identity, do not form strong bonds with their ethnic group they belong to. Their goal is to become a member of the society as whole and to avoid being stigmatized as 'the other'. As one of the students, a newcomer from Ukraine expresses it aptly: "We should all be able to live within the united nation, (...) the point to which we all are leading to, is the assimilation of the representatives of another cultures (...)" In the contrary, the 'salad bowl' ideology may be linked to a very strong identity as far as newcomers are concerned. The individuals, to whom such a type of identity could be attributed, often give emphasis to their difference, by closing themselves in kind of groups of the same origin, at the same time drawing the visible boundaries between them and the other ethnic groups. ...read more.

It has been shown in the questionnaires when a Hungarian student claimed: "I am glad I can still take part in Hungarian festivals organized in New Brunswick". The cultural events can be performed on a large scale as in the case of the Irish, who every year organize Saint Patrick's Day Parade, which takes place in New York City or Polish Americans who organize Pulaski's Parade to highlight their contribution to the American War for Independence and to show the might of the Polish nation. In this particular case, ethnic stratification is meaningful in a way that it either strengthens the bonds that link the individual with the ethnic group he or she belongs to or on the contrary, it weakens these bonds. In general, ethnicity-linked factors often influence the process of developing social bonds. This directly refers to the process of shaping one's identity. CONCLUSIONS The question, which entity of those two is more fundamental - 'ethnicity' or 'identity' has been a topic of many discussions among the social scientists. "Some assume that identity (...) is the most basic aspect of ethnicity (...)" (Eriksen 1995, p. 255). The others agree with Abner Cohen (1974) that ethnic organization - the pursuit of group interests - is the very raison d'�tre of ethnic identity. They also stuck up for his theory that identity would vanish if it had no organizational focus. From my case study, it is clearly seen that neither of them is more fundamental. I have managed to show in this essay that 'identity' and 'ethnicity' are interdependent entities. They mutually influence each other and they are both complementary expressions of each other. To my mind, this observation might be seen as a tentative answer to the research question formulated at the very beginning. Needless to say, the area of 'ethnicity' and 'identity' studies is very diffuse and ramified, which makes the outcome of my research only perspectival and provisional. This is also, why I had to curtail the discussion of 'ethnicity' and 'identity' to the needed minimum, while both of them clearly deserves a bulky volume themselves. ...read more.