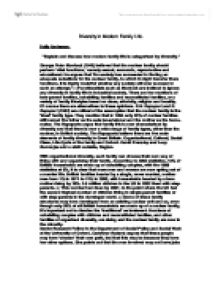 Diversity in Modern Family Life. Holly Anderson. "Explain and discuss how modern family life is catagorised by diversity." George Peter Murdock (1949) believed that the nuclear family should perform 'vital functions,' namely sexual, economic, reproductive and educational. He argues that 'No society has succeeded in finding an adequate substitute for the nuclear family, to which it might transfer there functions. It is highly doubtful whether any society will ever succeed in such an attempt.' [1.] Functionalists such as Murdock are inclined to ignore any diversity in family life in industrial society. There are few mentions of lone-parent families, cohabiting families and reconstituted families, or a variety of family lifestyles based on class, ethnicity, religion and locality. Of course there are alternatives to these opinions. R.N. Rapoport and R. Rapoport (1982) are critical of the assumption that the nuclear family is the 'ideal' family type. They mention that in 1994 only 20% of nuclear families still named the father as the sole breadwinner and the mother as the home-maker. The Rapoports argue that family life is now charactarised by diversity and that there is now a wide range of family types, other than the nuclear, in British society. The Rapoports believe there are five main elements of family diversity in Great Britain. Organizational, Cultural, Social Class, Life-Cycle of the family and Cohort. David Eversley and Lucy Bonnerjea add a sixth variable, Region. ...read more.

Studies such as Geoffrey Driver (1982), Mary Chamberlain (1999) and Berthoud and Beishon (1997) [7], generate a picture that suggests that families of ethnic minorities in Britain have indeed adapted. But they have not fundamentally altered their traditions to those they are now familiar with in the UK. When this point is made, it is clear that ethnic minority groups have most certainly contributed to the diversity of family life in Britain, while retaining their cultural heritage at the same time. However, it has been pointed out that changes are taking place within the ethnic societies in Britain, namely the younger generations, who are becoming increasingly familiar with British culture that surrounds them, and less familiar with their parents'. Errol Lawrence (1982) agrees that different cultural and ethnic histories produce new and different family 'norms' [6.] Young and Willmott (1973) argue that working-class families are more likely to be extended and while urban renewal policies have led to many being split up, this type of family will generally try to remain as close as possible to each other. They also state that middle-class families are less likely to live close by, but they do keep in regular contact. The Rapoports claim that there may be more significant differences between middle-class and working-class families, that stem a little deeper. They claim that the relationship between husband and wife will differ, as well as the way the children are socialized and disciplined. ...read more.