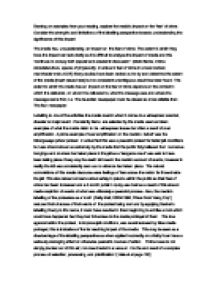 Drawing on examples from your reading, explore the medias impact on the fear of crime. Consider the strengths and limitations of the labelling perspective towards understanding the significance of this impact.

Drawing on examples from your reading, explore the media's impact on the 'fear' of crime. Consider the strengths and limitations of the labelling perspective towards understanding the significance of this impact. The media has, unquestionably, an impact on the fear of crime. The extent to which they have the impact can lack clarity as it is difficult to analyse the impact of media and this 'continues to occupy both popular and academic discussion' (Mark Banks, Crime &media&culture, spaces of (in)security: media and fear of crime in a local context, manchester met uni,UK) Many studies have been carried out to try and determine the extent of the media (insert cases here) but no consistent unambiguous result has been found. The extent to which the media has an impact on the fear of crime depends on the context in which it is delivered, on whom it is delivered to, what the message was and where the message came from, i.e. The Guardian newspaper could be viewed as more reliable than The Sun newspaper. Labelling is one of the activities the media revel in when it comes to a widespread scandal, disaster or major event. Constantly items are selected by the media used as token examples of what the media claim to be widespread issues but often a result of over amplification. A prime example of over amplification on the media's behalf was the Strangeways prison protest. ...read more.

they were completely negligent by firstly being unaware of what was going on in the stadium they were supposed to be monitoring and secondly by not heeding to the warnings that the turnstiles in place 'did not give anything like the access to the ground needed by fans' (scraton,page 60) Had the agreed major incident plan been executed it may have been possible to spare many of the 96 lives lost. 'Eventually the two perimeter gates were opened revealing the full horror on the terrace below... Bodies were dragged from pens and laid down on the pitch' and then carried to the gymnasium on makeshift stretchers which were actually advertising hoarding tore down by fans to help (scraton, page 60). An incorrect police statement was released almost immediately by the police in which it was stated that it could have been a possible pitch invasion which was a definite lie as pitch invasion suggests they were without ticket trying to ruin the game, when in fact many were season ticket holders who loved football and couldn't wait to watch the match. The next lie was told again by the police in which they stated that the fans had forced open an exit gate and they themselves caused the inrush into the already crammed pens.(scraton, page 60).Instant condemnation of LFC fans followed these statements from the police.and within the 'hour, the lens of hooliganism was firmly in place.' ...read more.

It appears here that the media have construed a false impression of the neighbourhood consensus towards Hamilton before the attack; blinded by the exposition of his character which the attack itself revealed. This is a prominent feature, as discussed in previous examples, of how knee-jerk labels do not usually ring true to the overarching truth. This incident caused moral panic as many feared there could be a Hamilton in their areas across the nation and so pressure was put upon MP's to increase gun control, and the pressure was successful in achieving such control measures. Therefore it is logical to see that the incident greatly increased fear of crime. To conclude, I feel the extent to which the media has an impact on the fear of crime depends importantly on the context of each situation. It would be unfair for me to say that all media has a grand impact on the fear of crime, based solely on the three examples I have used. However, what these examples illustrate is the motivation of the media to produce material which will attract public attention. The crucial factor of whether or not the coverage will impact on the fear of crime is how widespread the labels produced by media institutions reach. These examples have caused me to scrutinize much more of the media I come across and scrutiny I feel is the key aspect to be considered in avoiding an unfounded fear of crime. ?? ?? ?? ?? ...read more.