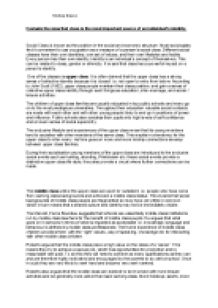 Evaluate the view that class is the most important source of an individuals identity.

﻿Melissa Dawes Evaluate the view that class is the most important source of an individual?s identity. Social Class is known as the position in the social and economic structure. Most sociologists find it convenient to use occupation as a measure of a person?s social class. Different social classes have their own identities, own set of values, and their own lifestyles and habits. Every person has their own identity. Identity is an individual?s concept of themselves. This can be related to class, gender or ethnicity. It is said that class has a powerful impact on a person?s identity. One of the classes is upper class. It is often claimed that the upper class has a strong sense of collective identity because it is ?closed? i.e. not open to entry from below. According to John Scott (1982), upper class people maintain their class position, and gain a sense of collective upper class identity through such things as education, inter-marriage, and social / leisure activities. ...read more.

Roberts argues that the middle class place a high value on the ideas of a ?career?. This means they try to achieve a secure job, which has opportunities for promotion and is reasonable well paid. To do this they will need to achieve as many qualifications as they can and are therefore highly motivated and encouraged by the parents to do well at school. Once in a job they are very likely to work hard and become very work-centred. Roberts also argues that the middle class are claimed to be involved with more leisure activities and be generally more active than said working class. More holidays, sports, more visits to the theatre and countryside etc take place and this happens much more frequently than other classes. The economic basis for class identity and solidarity has weakened for the working class due to the heavy manual jobs declining , making room for the new, modern forms of work. However, despite all that, there are still things that branch the class together to create an identity. ...read more.

argued that class is the most common and powerful source of social identity. He found that 60% of the sample he studied thought of themselves as belonging to a particular social class. Over 90% could place themselves in a class if prompted. Marxist theory supports this where they say social classes are based on their economic position. On the other hand, Mike Savage?s research suggests that class is still an important influence on people?s lives and living standards but class identities have weakened. Most people recognise the relevance of class in the wider society but are not keen to express their own personal identities in class terms. So the typical attitude towards class identity is one of mixed feelings. Whilst social class proves very important for someone?s sense of identity, other aspects must be taken into account. Ethnicity, age and gender all affect our collective identity as well. To conclude, class is important as a source of collective identity as people learn to identify with members of their own social class and become aware of the differences that separate social classes. It makes People become ?class conscious?. ...read more.