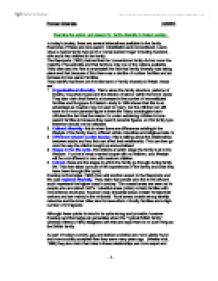 Examine the extent, and reason for, family diversity in today's society.

Examine the extent, and reason for, family diversity in today's society. In today's society, there are several alternatives available to the family. Examples of these are lone-parent, cohabitation and reconstituted. Leach views a typical family type as the 'cereal packet image' including husband, wife and a few children in the family. The Rapoports (1982) claimed that the 'conventional family did not cover the majority of households and that family is only one of the options available. They were also the first to emphasise the fact that family diversity was taking place and that because of this there was a decline of nuclear families and an increase in lone-parent families. They identify that there are five elements of family diversity in Britain, these are: 1. Organisational diversity- This is when the family structure, patterns of kinship, household types and the division of labour within the home varies. They also claim that there is a increase in the number of reconstituted families and Burgoyne & Clarke's study in 1984 shows that this is an advantage as couples may not want to marry, but the children can still have to or more parental figure in there life. ...read more.

(Weeks et al, 1999) they also claim that roles in these relationships are more equal and there is more choice available and negotiation is also involved in the relationship. Feminists would strongly agree with this, especially Radical feminist's as they see Lesbianism as the solution to unequal roles within the family. New reproductive technologies can now give people the opportunity to have babies when they are in capable or infertile. This was first established in 1978 when the first test tube baby was born. Macionis & Plummer said that surrogate motherhood is another option as well and stated that there is no doubt that there are more choices available then before. These technologies have now made it available for heterosexual, homosexual single and older women to have babies. This increases the diversity already taking place as when these different types of families are created Lone parenthood has never been uncommon, but the cause of it has changed. First it was caused through the death of a partner, but now it is now created through divorce. Statistically, 1 in 3 marriages end in divorce (2000) and nearly half of those divorced remarry within a year. ...read more.

Driver (a982) found that these families had a large amount of matrifocal families (female headed), but Phoenix also emphasises the danger of generalising, as ethnic minority families are themselves diverse. Barrows, in 1982, looked at West Indian families and said there are 3 different types on families in the Caribbean. These are the conventional family, cohabiting and the matriarchal family. Chamberlain in 1999 looked at importance to the wider kin and stated that they do play an important part in the up bringing of children. Functionalists would support Berthound & Beishon (1997) who said that there was not so much importance given to a long term relationship or marriage, therefore divorce and lone-parent statistics were high including illegitimacy and unemployment. Cypriot families in Britain, studied by Oakley in 1982 suggests that they have very strong ties with their extended families in Cyprus and this was maintained with few people after moving here with the elderly. To conclude, I wound say these factors do very strongly take part in the increase in family diversity. Many points are very strong which to prove the fact that some people don't mind this diversion, however strong point have been given to criticise these points too. Poonam Dhameja 10/05/07 - 1 - ...read more.