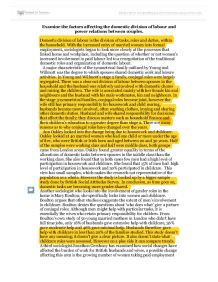 Examine the factors affecting the domestic division of labour and power relations between couples.

Examine the factors affecting the domestic division of labour and power relations between couples. Domestic division of labour is the division of tasks, roles and duties, within the household. With the increased entry of married women into formal employment, sociologists began to look more closely at the processes that linked home and workplace, including the question of whether or not women's increased involvement in paid labour led to a renegotiation of the traditional domestic roles and organization of domestic labour. A major characteristic of the symmetrical family outlined by Young and Willmott was the degree to which spouses shared domestic work and leisure activities. In Young and Willmott's stage 2 family, conjugal roles were largely segregated. There was a clear cut division of labour between spouses in the household and the husband was relatively uninvolved with domestic chores and raising the children. The wife is associated mainly with her female kin and neighbours and the husband with his male workmates, kin and neighbours. ...read more.

Boulton argues that other studies exaggerate the extent of men's involvement in childcare. Boulton denies the questions about 'who does what' give a picture of conjugal roles. Although men might help with particular tasks, it is essentially the wives who retain primary responsibility for children. From Boulton's own study of 50 young married mothers in London who didn't have full time jobs, only 18% of husbands gave extensive help with childcare, 36% gave moderate help and 46% gave minimal help. Husbands therefore gave help with childcare in less than 20% of the families studied. This study doesn't have any meaning; it doesn't give a clear picture. It also doesn't state what childcare roles were assessed. However on a plus side it can compare trends. A third sociologist Jonathon Gershuny has examined how social changes have affected the burden of work for British husbands and wives, a possible change affecting this area is the growing number of women taking paid employment outside the home. ...read more.

Advantages of this study are that it's a wide study, which means its research came from a wide range of social groups. However a disadvantage is that the study is out of date, society has changed and women are making larger decisions. He has also only studied one class of families which makes the study restricted. Although this is a smaller reason compared to the others it is sill important that same sex relationships should be taken into consideration when evaluation domestic labour and power of genders. In the majority of same sex relationships it has been proven that in 81% of households neither partner did more than 60% of the housework, it therefore showed that the one doing less housework spend more time in paid employment. Most of the evidence stated here suggests women are still a long way from achieving equality within marriage in contemporary Britain today. They are still primarily responsible for domestic tasks and they have less power than their within marriage. Husbands of wives with full time jobs seem to be taking over some of the burden of housework, although the change is slow and some inequality remains. ...read more.

It has some good knowledge of studies which show inequality exists but the candidate fails to get to grips with the precise question set and this lets it down (the question is which factors affect conjugal roles). The mark could also be raised by using more perspectives such as Feminism and Marxism (especially to develop issues of power).