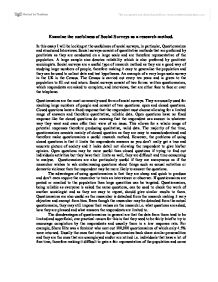 Examine the usefulness of Social Surveys as a research method.

Examine the usefulness of Social Surveys as a research method. In this essay I will be looking at the usefulness of social surveys, in particular, Questionnaires and structured Interviews. Social surveys consist of quantitative methods that are preferred by positivists as they are conducted on a large scale and are therefore representative of the population. A large sample size denotes reliability which is also preferred by positivist sociologists. Social surveys are a useful type of research method as they are a good way of studying large numbers of people, therefore making it easy to generalise the population and they can be used to collect data and test hypotheses. An example of a very large scale survey in the UK is the Census. The Census is carried out every ten years and is given to the population to fill out and return. Social surveys consist of two forms: written questionnaires, which respondents are asked to complete; and interviews, that are either face to face or over the telephone. Questionnaires are the most commonly used form of social surveys. They are usually used for reaching large numbers of people and consist of two questions: open and closed questions. ...read more.

Another way to increase the response rate of questionnaires could be to offer incentives such as a pen but then again that would add to the cost of conducting the research as well. Interpretivists would not think that questionnaires are useful as they argue that data from questionnaires lack validity and do not give a true picture of what is studied. People may lie, misinterpret the questions, not know the answers to the question, exaggeration could occur or even the wrong person could fill in the questionnaire making the research to be far less reliable. This is what Schofield experienced when he conducted his research in 1985. One of his questions asked: "Are you a virgin?" and the response were 'no not yet', demonstrating how people could easily misinterpret a simple question. There is also the problem of time lags i.e. the time it takes for the respondent to receive, complete and send back the questionnaire. All these factors question the usefulness of questionnaires and consequently social surveys. The other types of social surveys most used are interviews. Interviews can be conducted face to face, over the internet or over the telephone. ...read more.

The problems of using structured interviews are that they can still have some interviewer bias/effect on the response from the interviewee and therefore an answer could be exaggerated or adapted to likings of the researcher. There are usually a limited range of alternative answers which affects the validity of the research and these limited responses can be limited, overlap or they can be open to interpretation as well. Different interviewers could mean that some variables aren't kept the same and therefore again could have an affect how the response of the responder. As a rapport is not built in structured interviews it means that it is harder to uncover sensitive information as the respondent may not feel comfortable to talk about something to a stranger. In conclusion social surveys usually consist of structured interviews and questionnaires both of which have similar usefulness's and even similar disadvantages. Positivists nevertheless love to use social surveys as they produce hard reliable, quantitative data and they can easily be conducted cheaply again to test the reliability of your first results. Interpretivists disagree with positivists and would say that social surveys are not useful at all as they do not produce valid data that can be used to produce an accurate picture of society. ?? ?? ?? ?? ...read more.