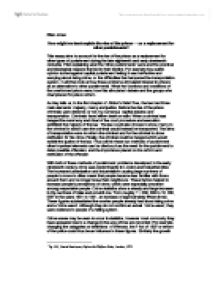 How might we best explain the rise of the prison as a replacement for other punishments?

Ellen Jones How might we best explain the rise of the prison? as a replacement for other punishments? This essay aims to account for the rise of the prison as a replacement for other types of punishment during the late eighteenth and early nineteenth centuries. First explaining what the 'other punishments' were and the practical and ideological reasons that led to their decline. For example how public opinion turned against capital punishment feeling it was ineffective and worrying about rising crime, or the difficulties that hampered the transportation system. It will then look at how these problems stimulated interest in prisons as an alternative to other punishments. What the functions and conditions of the unreformed prison were, how this stimulated debate and the groups who championed for prison reform. As Hay tells us, in the first chapter of Albion's Fatal Tree, the law had three main elements: majesty, mercy and justice. Before the rise of the prison criminals were deterred, or not, by numerous capital statutes and transportation. Criminals faced either death or exile. When a criminal was hanged the ceremony and ritual of the court procedure and execution exhibited the majesty of the law. The law could also choose to show mercy to the criminal in which case the criminal would instead be transported. The aims of transportation were to reform the criminal and for the criminal to show retribution for his crime. Finally, the criminal could be hanged which would exhibit the justice of the law. Thus within these two methods of punishment other important elements can be cited such as the need for the punishment to deter possible offenders, and the importance placed on the reform and retribution of the offender. ...read more.

It also needed to satisfy the views of public opinion and of reformers. Public opinion strongly reflected the view above that offenders should have no advantage over a non-offender. This was also a strong influence when reform began on prisons and people worried that prisoners ought not to receive a better diet the working poor. Reform also became very important with the rise of the prison as at some stage prisoners would re-enter the community. Current prisons When did campaign for reform begin? Two main groups of reformers were Utilitarians led by Bentham and influenced by Beccarias ideas and religious groups such as the Quakers and Evangelicals. These groups campaigned for better conditions in prisons aiming to 'develop imprisonment as a suitable substitute for indiscriminate hanging' and transportation. The changes they thought necessary differed between each group but they all agreed prisons should be 'less physically damaging and morally corrupting but not easier or pleasanter'7 for prisoners. John Howard, Jonas Hanaway and George Holford were all prominent prison reformers who visited and wrote books and pamphlets about the conditions they observed in prisons and their ideas to improve them. These groups started calling for prison reform in the 1770s, Jonas Hanaway wrote two pamphlets in 1776 and 1781 outlining the use of solitary confinement for reforming prisoners. The methods employed would be seclusion of the prisoners from one another, manual labour and religious exhortation (need word), later collectively termed the separate system. Signif early critics of reform were dissenters think crime sin and the purpose of punishment conversion and reformation of the sinner. ...read more.

The same year a select committee from the House of Lords and House of Commons reported. The House of Commons reported on the need for classification. Peels prison act of 1923 summarised the reports of the two committees institutionalising classification and industry. However it did not touch Hulks, which were increasingly used due to the lack of transportation and were also in desperate need of reform or removal, first being established as a temporary measure. However the ides of industrial prisons was not popular with the public for three main reasons; protest of local craftsmen who felt threatened by the industry; growing uselessness as machines can do the job better along with public feeling criminals should not be put in a more eligible position than others by being given education and taught a trade; and lastly the public felt prison should not be a scene of 'cheerful industry', thus there was a growing imposition of silence. Rothman argues for prison as method of dealing social control, just one of a lot of institutions that popped up?? America. Weiss is evaluating arguments that place political economy in the forefront of analysis such as Rusche and Kirchheimers, penal system serves the economy in some way, form and severity influenced by labour supply, prison system in eng principle of 'less eligibility', prison conditions must be worse than poorest. Conclusion Once become interested in prisons as a punishment don't stop? Notes John Howard in Ignatieff Who were reformers? What were their motivations? Prison was not used in the way that it is today Rich tend to assume are nice to neighbours and poor don't do this. ...read more.