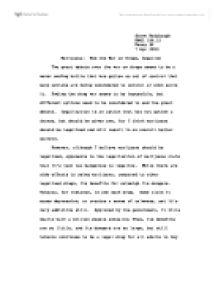 Steve Radabaugh ENGL 106.12 Essay #2 7 Apr 2003 Marijuana: End the War on Drugs, Legalize The great debate over the war on drugs seems to be a never ending battle that has gotten so out of control that many options are being considered to control or even solve it. Ending the drug war seems to be impossible, but different options need to be considered to end the great debate. Legalization is an option that has not gotten a chance, but should be given one, for I think marijuana should be legalized and will result in an overall better society. However, although I believe marijuana should be legalized, opponents to the legalization of marijuana claim that it's just too dangerous to legalize. While there are side effects to using marijuana, compared to other legalized drugs, its benefits far outweigh its dangers. Tobacco, for instance, is one such drug. Some claim it eases depression, or creates a sense of calmness, yet it's very addictive still. Approved by the government, it kills nearly half a million people annually; Thus, its benefits are so little, and its dangers are so large, but still tobacco continues to be a legal drug for all adults to buy and use. ...read more.

Opponents to legalization say that when a drug is legalized, then the inspiration to keep drug free is removed (Bennett 594). The truth is that young people often find things more appealing if they are forbidden, and taking away the very thing that makes it appealing, will result in loss of interest. From observing friends, I have noticed that when they are 18, 19, or 20 years old, they consume large amounts of alcohol. However, when they turn 21, they have their couple of weeks of fun, because it has just become legal, and then their consumption slows down, proving that, like alcohol, once marijuana becomes legal, much like that of a 21 year old, its use will decrease. Yet still, the legalization of marijuana, according to some people, will not cut down on the crime rate, but rather increase it, however, I believe the crime rate will be reduced with the legalization of marijuana. Advocates for keeping marijuana illegal continually say that legalization will only lead to more crime; "Making drugs legal would just be a way of subsidizing their habit. ...read more.

We take from that "1.6 million people," the 300,000 in there on drug charges, and you get 1.3 million inmates. At "$25,000 per inmate per year" this is a cost of $32,500,000,000 annually. The difference in the two operating costs is $7.5 billion. What could the government do with an extra $7.5 billion each year? They could pay the national debt, help fund education programs, or get healthcare for the elderly, yet, they would rather keep the people who were caught with miniscule amounts of marijuana on them in prison. This is pretty selfish of the government to use good money for bad reasons. If living in a society where there is a decrease in the use of drugs, a decrease in the crime rate, and an extra $7.5 billion is floating around annually sounds good, then the first step to all of these great rewards is to legalize the use of marijuana. Marijuana, although looked at as a negative drug is no different than other legal drugs on the market today being no more addictive, harmful, or chemically treated as tobacco and alcohol. Therefore, the first step to ending the war on drugs is to admit that there should be no war, and the legalization of marijuana must take place. ...read more.