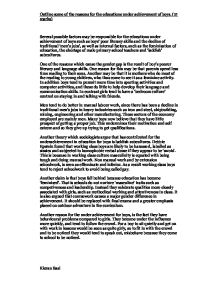 Several possible factors may be responsible for the educations under achievement of boys such as boys' poor literacy skills and the decline of traditional 'men's jobs', as well as internal factors, such as the feminisation of education, the shortage of male primary school teachers and 'laddish' subcultures. One of the reasons which cause the gender gap is the result of boy's poorer literacy and language skills. One reason for this may be that parents spend less time reading to their sons. Another may be that it is mothers who do most of the reading to young children, who thus come to see it as a feminine activity. ...read more.

These sectors of the economy employed are mainly men. Many boys now believe that they have little prospect of getting a proper job. This undermines their motivation and self esteem and so they give up trying to get qualifications. Another theory which sociologists argue that has contributed for the underachievement in education for boys is laddish subcultures. Debbie Epstein found that working class boys are likely to be harassed, labelled as sissies and subjected to homophobic verbal abuse if they appear to be 'swots'. This is because in working class culture masculinity is equated with being tough and doing manual work. ...read more.

It is also argued that coursework causes a major gender difference in achievement. It should be replaced with final exams and a greater emphasis placed on outdoor adventure in the curriculum. Another reason for the under achievement for boys, is the fact they have behavioural problems compared to girls. They become under the influence more quickly, and tend to follow the crowd. For a boy to sit quietly and get on with work in lessons would be seen as quite girly, so to fit in with the crowd and to be noticed they would tend to speak out, misbehave because they come to school to be noticed. ?? ?? ?? ?? Outline some of the reasons for the educations under achievement of boys. (12 marks) Kieran Basi ...read more.