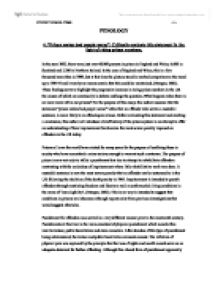 PENOLOGY 4. "Prison makes bad people worse". Critically evaluate this statement in the light of rising prison numbers. In the year 2002, there were just over 68,000 persons in prison in England and Wales, 6,000 in Scotland and 1,200 in Northern Ireland. In the case of England and Wales, this is a few thousand more than in 1999, but at this time the plateau stood in marked comparison to the trend up to 1997-8 and it was by no means certain that this could be maintained, (Morgan, 2002). These findings serve to highlight the progressive increase in rising prison numbers in the UK the causes of which are continually in debate and begs the question; What happens when there is no more room left in our prisons? For the purpose of this essay, this author assumes that the statement "prison makes bad people worse" infers that an offender who serves a custodial sentence, is more likely to re-offend upon release. Before evaluating this statement and reaching a conclusion, this author will introduce a brief history of the prison system in an attempt to offer an understanding of how imprisonment has become the most severe penalty imposed on offenders in the UK today. Prisons all over the world have existed for many years for the purpose of confining those in society who have committed a crime serious enough to warrant such a sentence. ...read more.

This may hinder their attempts to live lawful lives for example; problems getting a job and even psychological effects, which may become apparent in their behaviour, (Cavadino & Dignan, 1997). This evidence could be used to support the argument that prison does make people worse. Rehabilitation theory suggests that some forms of punishment can actually reduce the likelihood of re-offending and alter an offender's behaviour and attitude. Together the prison service and the probation service are heavily involved with rehabilitation as well as the treatment and training of offenders, (Wilson et al, 2003). As a main aim of the prison service to assist in the rehabilitation of offenders, the provision of accredited programmes such as PASRO (Prisons Addressing Substance Related Offending) and ETS (Enhanced Thinking Skills) attempt to address prisoners' offending behaviour whilst in prison. However, a report by the Social Exclusion Unit found that the prison experience causes such damage to an offenders' rehabilitation that it outweighs the effectiveness of the programmes, (Solomon, 2003). Another criticism of the penal system is that many offenders are sentenced to such short periods of custody that they are unable to gain access to any rehabilitative interventions. This evidence could also suggest that prison can make bad people worse. The theory of incapacitation implies more emphasis on public protection rather than the behaviour of offenders which coincidently is another main remit of the probation service. ...read more.

This evidence would appear to suggest that people who have served custodial sentences have been made worse by the experience and that imprisonment is not an effective punishment. Contributing to this argument is the theory that these statistics are only obtained from recorded crime suggesting that the figures may in reality be significantly higher as many crimes are not recorded. In conclusion it would appear that there is much evidence to support the claim that prison makes bad people worse such as the statistical evidence revealing reconviction rates. On the other hand, there are also arguments for prison as an effective punishment such as the justifications for imprisonment including rehabilitation and deterrence theories. It would appear that prison does indeed have an influence on some prisoners re-offending but it would be difficult to assume that this is the case for all offenders who have served a custodial sentence. This would suggest that for some offenders prison is effective and for others it is not. Having said this, it is important to recognise that prison does ensure public safety from offenders who pose danger to society, but only for the period they are in custody unless they emerge from prison rehabilitated. For those offenders who could be dealt with in another manner, community penalties offer the versatility in sentencing options necessary to provide effective punishment without contributing to the growing problem of increasing prison numbers. It is therefore vital that the most appropriate punishment is imposed individually taking the crime and the offenders' circumstances into account when sentencing. ...read more.